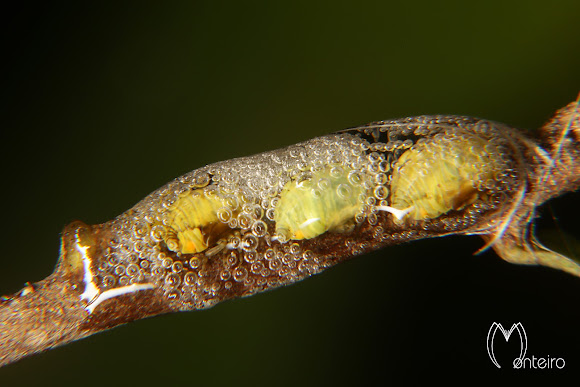 Froghopper families are best known for the nymphal stage, which produces a cover of foamed-up plant sap visually resembling saliva; the nymphs are therefore commonly known as spittlebugs and their foam as cuckoo spit, frog spit, or snake spit. This characteristic spittle production is associated with the unusual trait of xylem feeding. Whereas most insects that feed on sap feed on the nutrient-rich fluid from the phloem, Cercopidae utilize the much more dilute sap flowing upward from the roots via the xylem. The large amount of excess water that must be excreted and the evolution of special breathing tubes allow the young spittlebug nymphs to grow in the relatively protective environment of the spittle. Normally an animal shouldn't be able to survive on a diet so low in nutrients, but the insects' digestive system have two symbiotic bacteria that provides them with the essential amino acids. The foam serves a number of purposes. It hides the nymph from the view of predators and parasites, and it insulates against heat and cold, thus providing thermal control and also moisture control; without the foam, the insect would quickly dry up. The nymphs pierce plants and suck sap causing very little damage, much of the filtered fluids go into the production of the foam, which has an acrid taste, deterring predators. A few species are serious agricultural pests. (Wikipedia)