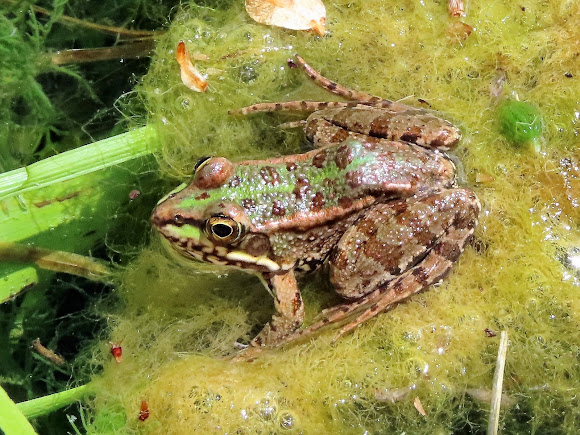 When we are in front of a common frog, what strikes us the most is its streamlined and hydrodynamic appearance, perfectly adapted for jumping and diving. Sometimes they reach total lengths greater than 10 cm, although the most common sizes range between 7 and 8 cm. The head is little differentiated from the rest of the body and forms a kind of triangle or arrowhead with a slightly rounded end. It is crowned by prominent eyes that are very close to each other. The pupils, horizontal and oval, are dark in color and are surrounded by the iris, golden in color and dotted with a multitude of small dark spots. The rounded eardrums are very marked, being clearly visible. Males have grayish vocal sacs on both sides at the corners of the mouth. The color of the body is very variable, dominating the greenish and brown background tones. In some specimens the color may even be almost black. The coloration is more vivid in the front part of the body and darkens as we get closer to the back. It is common (although it does not always appear) the presence of a clear vertebral line (green or yellowish) that runs along the entire back from the tip of the snout until it reaches almost to the anus. It also highlights the presence of 2 slightly elevated glandular lines located dorsolaterally, starting from each eye, ending their journey at the point where the hind legs are inserted. They are usually golden or brown in color. The ventral area is dirty white and may be dotted with irregular black spots. The skin is practically smooth, although it has small glands and warts distributed throughout the body. The front legs are robust and have four long free toes ending in a point. The hind legs are very long and muscular, they have five equally long fingers joined by a wide webbing, which act like real oars when the animal is in the water. Sexual dimorphism: Apart from being smaller and having vocal sacs, males are characterized by having more robust front legs, necessary for amplexus or mating, and by the presence of black calluses on the base and face during mating season. inner of the first toe of the forelegs.

Pond in the great Turia Garden (Valencia). Strictly aquatic species. It occupies all kinds of bodies of water, although it is present mainly in permanent environments. It shows few requirements in relation to the quality of the water.

It is an endemic species of the Iberian Peninsula and the south of France, appearing up to almost 2400 m of altitude.