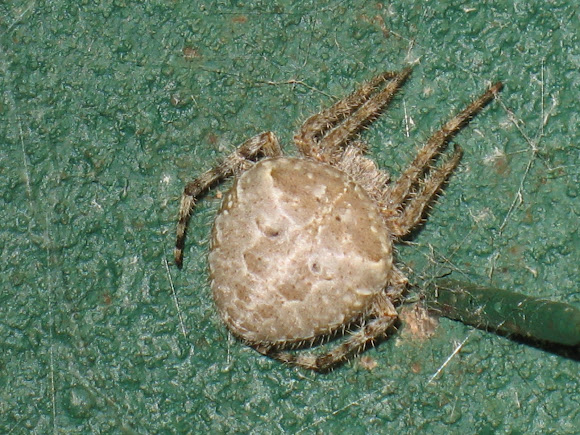 The barn spider (Araneus cavaticus) is a nocturnal, yellow and brown spider with striped legs and a marking on its underside that is typically a black background with two white marks inside the black, although color ranges can be quite magnificent. It is about three quarters of an inch long with a large round abdomen. Like many other species of orb weavers, it takes down its web and rebuilds another web every evening, consuming the silk from the remaining web to conserve its resources. Its "orb" web is the archetypical web that contains symmetrical spokes connected by a spiral inside. They hide during the day and at night will sit in the middle of the web and wait for an insect to land on the web when hunting. These spiders are aggressive toward each other. They will attack each other if in close quarters, though many may inhabit the same structure or area at any given time. They are most commonly found in rafters and wooden structures in suburban and rural structures or areas, and on boats near lakes, thus getting their name, "barn spider". When agitated (by a puff of air, for instance) these spiders sometimes bounce up and down in the center of their webs, possibly in an attempt to look larger and more threatening. This reaction could be due to its response to vibrations in the web when prey is trapped. The Barn Spider will shake or sway the web to instigate further reaction from the prey caught within the web or to confirm that it was debris or other environmental disturbances (fallen leaves, sticks, etc.). They are also able to glean information about the object/insect, through the feel of the web as it shakes. If the spider senses a likely meal has been caught they will move to it and immediately begin wrapping it with silk.

They are mostly found in North America in late summer and through autumn. Barn spiders are most common in the Northeast US and Canada.