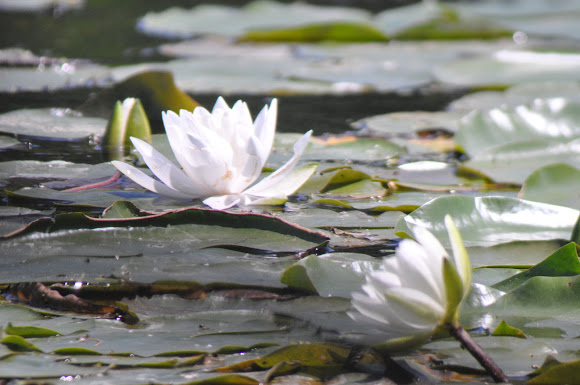 Ponds and sheltered areas of lakes and rivers, the mature leaf blades all floating on the surface of the water. Occasionally, foliage and even flowers can be found amid sphagnum and shrubs in a bog mat, silent testimony to plant succession from the days before the water-lily was engulfed by the mat as it grew toward the center of the bog lake. Our common white water-lilies have long been considered to represent two species, but are now usually regarded as one, with some authors recognizing the variation at the rank of subspecies; the subsp. odorata, often a smaller plant with petioles lacking red stripes and leaf blades usually with purple undersides, and subsp. tuberosa (Paine) Wiersma & Hellquist, a mostly larger plant with petioles purple-striped and leaves green or faintly purple tinged beneath. Both are widespread in Michigan and intermediate plants also occur.