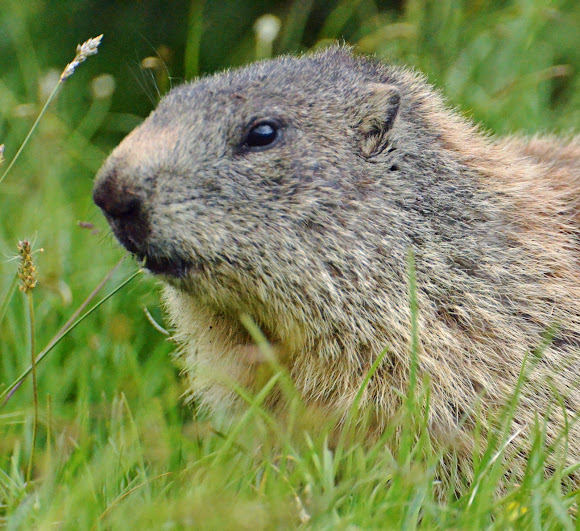 This alpine marmot was unusually approachable, and was spotted digging for plant roots. Notice the roots in its mouth and the strong front teeth on the second shot.

Native to the European Alps. They prefer alpine meadows and high-altitude pastures above the tree line and live in deep burrow systems, where they hibernate huddled next to each other from October to April. Spotted here at 2000 m ASL. The last shot shows the marmot's habitat, an area where trees have been lost to a storm.

Weighing up to 8 kg, alpine marmots are one of the largest of the Sciuridae. Their coat goes from dark brown to blonde though grey. You hear them before you see them! Marmots will whistle to each other warning for predators such as eagles.

I've just watched an episode of Life of Mammals and saw the Alpine Marmot. Very interesting!

Love the habitat shot here. Our own marmot (Marmota monax) is also called a 'whistle pig' here in the southern US.

Thank you Melissa! I hope you can see them one day. You'll hear them whistle before you see them.

Wow they are lovely photos! I would love to see one of these!

Marta:-) It always amazes how fat they can get on what is mainly a plant diet:-)

There you are, great shots!

Harsha, Jacob and Satyen, thank you!