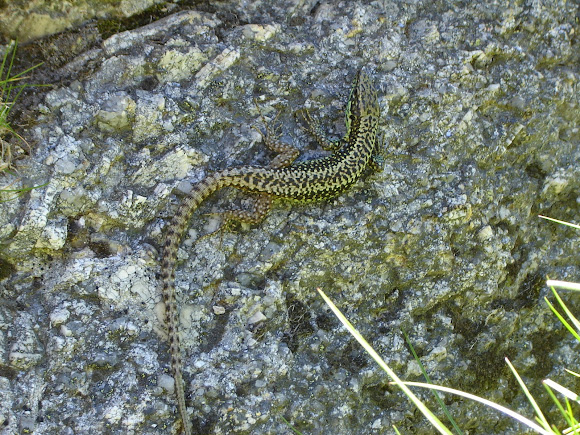 The Iberian rock lizard measures about 8 cm (3 in) from snout to vent with a long, slender tail twice as long again. It is somewhat flattened with finely boned, short limbs. The colour varies in different parts of its range. The general colour is light brown variously patterned with longitudinal bands of colour or longitudinal rows of dots and small patches. Unlike some other wall lizards, the stripe along the spine is less dark than other bands. Most, but not all, individuals have a distinctive green belly and the juveniles may have blue tails.A 2008 field study reported the underparts of Iberian rock lizards turn green with maturity, and the upperparts gradually turn green as the lizard ages further.

The Iberian rock lizard is found in the Cantabrian Mountains and in Galicia in northwest Spain, and also in the Serra da Estrela in central Portugal. It occurs at sea level in Galicia, but elsewhere is seldom found below an altitude of 1,000 m (3,281 ft) and up to 2,000 m (6,562 ft) above sea level in the mountains. It favours damp places among boulders in scrubby areas, and in Galicia, it is found in low-level woodlands.It is a cold-resistant species, often found above the tree line in areas where the winters are long and the summers wet or misty. Where its range overlaps that of the common wall lizard (Podarcis muralis), it is found at higher altitudes and it climbs higher up cliffs.

Spotted in Serra da Estrela "Mountain Range of the Star" near a little stream.