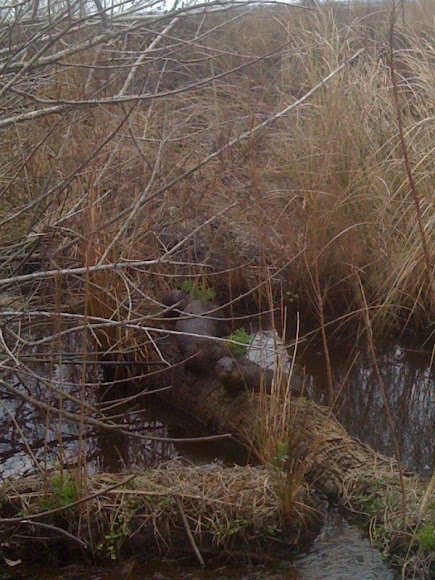 The northern river otter is a semi-aquatic mammal and a member of the weasel family. They build dens with tunnel openings near the water as well as in the water. The female gives birth to a liter of 1-6 young. This female otter had two babies with her about 1/3 her size. Otters like to eat fish, crayfish, frogs, shellfish, snakes, eggs and sometimes turtles and birds. Their numbers have declined because of loss of habitat, pollution and hunting. Otters can be active at night or day but generally they are more nocturnal most of the year. They become more active during the day in the winter. Otter prints are usually about 3 inches long. Both the front and rear feet show five toes. The claw marks are visible and can make the footprints appear pointed.

I spotted this mother otter and her two babies in a small canal along the Florida Trail in the Canaveral Marshes. I was able to walk slowly behind the trio as they swam south along the canal and observe them for about 15-20 minutes. The mother would perhaps panic a bit and swim ahead of the babies. The babies would cry out for their mother and try to keep up. When I stayed further back, the babies would catch up to their mom and she stopped moving away. Then I could watch the babies begin to play and climb in and out of the water. In my photos you can also see that the area recently had a control burn.