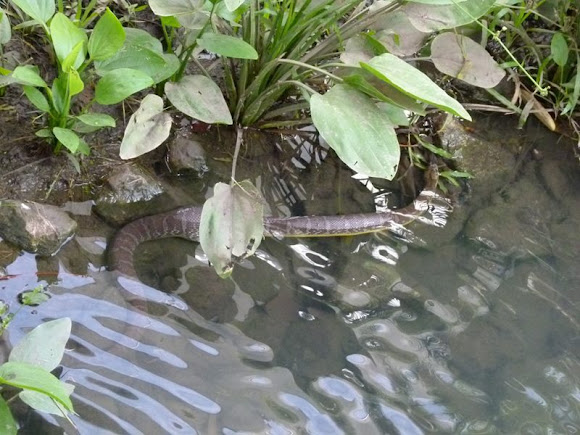 Snake skull is one of the first animals to be taxonomic. Patterned brown and soft in the head like a skull. The origin of the name. The nostril on top of your head to breathe easy on that of water. The belly scales are well developed. Can crawl on land fluently. Has grown about 2 feet in most of his life in the water. Even the litter. The snake-like pattern from birth to adult. But it is different than the color of the light-colored snake in the first place is usually pink. When the color will deepen to a dark brown. The big snake rarely seen on the show.

Distribution of species found in South Asia and Southeast Asia in the water. In Thailand The skull of the snake is still water. Water is not flowing. Unlike the South, who often live in the river or stream flowing strokes. The corner stone for shelter along the river swept away. Living aquatic animals and amphibians such as fish, frogs as food habits, predators are still in hiding a victim to come to them. And raid their victim. This picture taking from my work place at PTT-Research and technology institute.

The snakes are not aggressive habits. The venom is very weak. Not appear to harm humans. The bite wounds are only just bleeding. Popular culture is a popular pet for pet reptiles. In addition. Snake skull to take advantage of movies on your head in the leather industry as well.