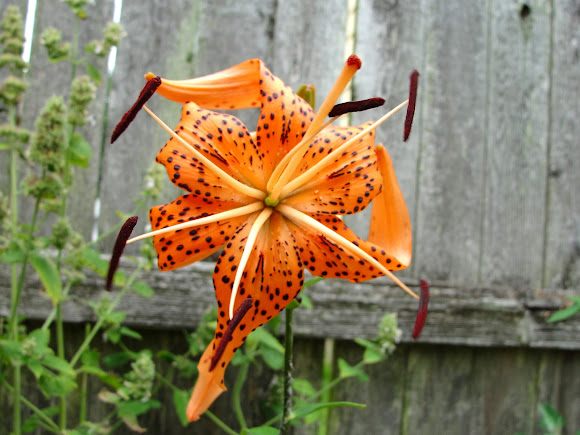 Tiger Lily, bears large, fiery orange flowers covered by spots. The name tiger probably refers to the spots on the petals. The flowers of this perennial can grow up to three inches in width. The Tiger Lily is also known as the Ditch Lily as it is found in and around ditches in large parts of America. The Tiger Lily has a strong, sweet and distinctively lily smell. Besides producing a stunning spectacle, most parts of this plant are edible. There are two varieties of the Tiger Lily: The Oriental Variety: Propagates through bulbs that form at leaf axils. The Common Wildflower Variety: Propagates by tuberous roots. Tiger Lily is sterile and does not produce seeds. They can, however, be propagated through the bulbils (small bulbs) that grow in the axils of the leaves. Bulb scales can be removed from the bulbils and grown in moist peat in a cool dark place until they produce bulbets. They can be then grown in a nursery and later planted outside. The Tiger Lily does not require any special care. Fertilizers are needed only in the poorest of soils. Tiger lilies can be sometimes attacked by slugs or lily beetles. You can grow the tiger lily in raised pots or use biological controls to keep the slugs at bay. The beetles can be removed by hand.

Tiger lilies thrive well in moist to wet soils and hence grow well near the ditches. Early to mid-autumn is the best time to plant out the bulbs in cool temperate areas, in warmer areas they can be planted out as late as late autumn.

most parts of this plant are edible. The Tiger Lily has significant medicinal use. A tincture is made from the fresh plant and has proved of great value in uterine-neuralgia, congestion and irritation, also in the nausea and vomiting of pregnancy. Tiger Lily has edible flower buds apart from edible roots and shoots. These can often have a bitter flavor. When baked, lily bulbs taste rather like potatoes.

I think these come in yellow now very hardy flower

How do you use this?

Neither did I at first but after joining Project Noah I realized many plants found right in my yard are edible it's amazing!

Interesting! I had no idea these were edible.

Thank You, I learned a lot about this flower, interesting it grows bulbs between its leaves instead of producing seeds!