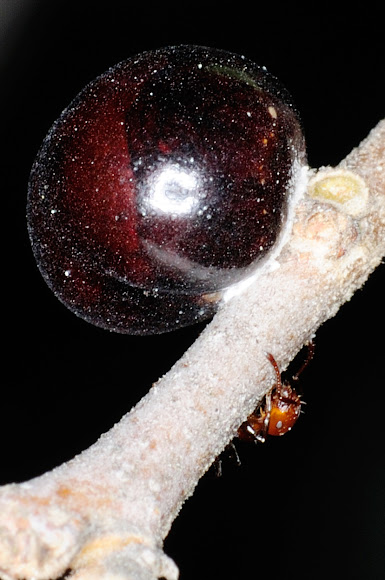 kermes (Kermes ilicis), a species of scale insect in the family Kermesidae (order Hemiptera), the common name of which also represents the red dye that is obtained from the dried bodies of these insects. The dye was often part of the tribute paid to conquering Roman armies, and, in the Middle Ages, landlords accepted it as payment for rent. It is the oldest known red dyestuff, resembling but inferior in colour to cochineal, it was used by the early Egyptians. Kemes ilicis feed on the sap of evergreen oaks; the females produce a red dye, also called "kermes", that is the source of natural crimson. As in the case of other scale-insects, the males are relatively small and are capable of flight, while the females are wingless. The females of the genus Kermes are remarkable for their gall-like form, and it was not until 1714 that their animal nature was discovered. In the month of May, when full grown, the females are globose, 6 to 7 mm. in diameter, of a reddish-brown colour, and covered with an ash-coloured powder. They are found attached to the twigs or buds by a circular lower surface 2 mm. in diameter, and surrounded by a narrow zone of white cottony down. At this time there are concealed under a cavity, formed by the approach of the abdominal wall of the insect to the dorsal one, thousands of eggs of a red colour, and smaller than poppy seed, which are protruded and ranged regularly beneath the insect. At the end of May or the beginning of June the young escape by a small orifice, near the point of attachment of the parent. They are then of a fine red colour, elliptic and convex in shape, but rounded at the two extremities, and bear two threads half as long as their body at their posterior extremity. At this period they are extremely active, and swarm with extraordinary rapidity all over the food plant, and in two or three days attach themselves to fissures in the bark or buds, but rarely to the leaves. In warm and dry summers the insects breed again in the months of August and September, and then they are more frequently found attached to the leaves. Usually they remain immovable and apparently unaltered until the end of the succeeding March, when their bodies become gradually distended and lose all trace of abdominal rings . They then appear full of a reddish juice resembling discoloured blood. In this state, or when the eggs are ready to be extruded, the insects are collected. In some cases the insects from which the young are ready to escape are dried in the sun on linen cloths—care being taken to prevent the escape of the young from the cloths until they are dead. The young insects are then sifted from the shells, made into a paste with vinegar, and dried on skins exposed to the sun, and the paste packed in skins is then ready for exportation. In the pharmacopoeia of the ancients kermes triturated with vinegar was used as an outward application, especially in wounds of the nerves. From the 9th to the 16th century this insect formed an ingredient in the " confectio alkermes," a well known medicine, at one time official in the London pharmacopoeia as an astringent in doses of 20 to 6o grains or more. Syrup of kermes was also prepared. Both these preparations have fallen into disuse.

on the twigs of a Holm oak.

Right LaurenZarate, I agree with you but I have not found any evidence in literature of a symbiotic relationship between ants and Kermes ilicis

The ant is "tending" the scale in exchange for the sweet excrement that the scale produces.

Hi Hema Shah! The red covering is actually the insect, a female. Do not be confused by the small ant that appears at the lower part of the twig. I still wonder what it was doing there and if there could be any kind of relationship between the ant an the kermes.

So the red covering is an extension of the insect?

Amazing stuff ,thanks for sharing. i hope I have the same spotting!

Thanks Maria. I did not notice that I extended so much in the description. I think I was a little enthusiastic when I found and ID for this spotting

This is really interesting and educational!

Well done arlanda. This is not like the scale insects I know. They grow impressive ones in Spain.

Finally, after months searching I found out what it is. It is not a gall as I always thought but a scale insect called kermes, very well known since the beginning of the humanity to produce red colour. Thanks martinl, your interest in this spotting impeded me to forget it!!

Thanks martinl, it is very interesting. I keep looking around

Here is a blog that has some fascinating information relating to your probable parasite. http://bluejaybarrens.blogspot.com.au/20...
This blames a cypnid wasp. I assume they are solid like yours.

I wonder if this is a resinous sap from the tree. (Unlikely for an oak).
The white powder at the base, and the ant makes me suspect some hemipteran bug. (Unlikely in a solid gall). I think we need some help here.

Actually, I tried to open the gall with my knife but the gall was too hard (and small) and it jumped away and I never found it. :(

I agree with you martinl, while I was doing the pics the ant was moving around the gall but never moved away. It looked as if the ant was guarding the gall. Definitely, I must do some more research about it

This gall seems to be attracting an ant. I wonder if its tenant needs further protection. This is similar behavior as a scale insect that produces honeydew to keep the ants around. I think there is a story behind this spotting