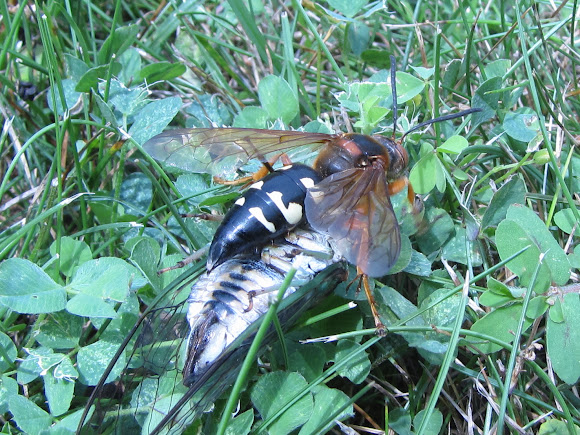 Adult eastern cicada killer wasps are large, 1.5 to 5.0 centimetres (0.6 to 2.0 in) long, robust wasps with hairy, reddish and black areas on the thorax (middle part), and are black to reddish brown marked with light yellow stripes on the abdominal (rear) segments. The wings are brownish. Coloration superficially resembles that of some yellowjacket and hornet species. The females are somewhat larger than the males, and both are among the largest wasps seen in the Eastern United States, their unusual size giving them a uniquely fearsome appearance. European hornets (Vespa crabro) are often mistaken for Eastern cicada killers. [Source: Wikipedia]

This ground-burrowing wasp may be found in well-drained, sandy soils to loose clay in bare or grass-covered banks, berms and hills as well as next to raised sidewalks, driveways and patio slabs. Females may share a burrow, digging their own nest cells off the main tunnel. A typical burrow is 25–50 centimetres (10–20 in) deep and about 1.5 cm (0.59 in) wide. In digging a burrow, the female dislodges the soil with her jaws and, using her hind legs, pushes loose soil behind her as she backs out of the burrow. Her hind legs are equipped with special spines that help her push the dirt behind her. The excess soil pushed out of the burrow forms a mound with a trench through it at the burrow entrance. Cicada killers may nest in planters, window boxes, flower beds or under shrubs, ground cover, etc. Nests often are made in the full sun where vegetation is sparse. [Source: Wikipedia]