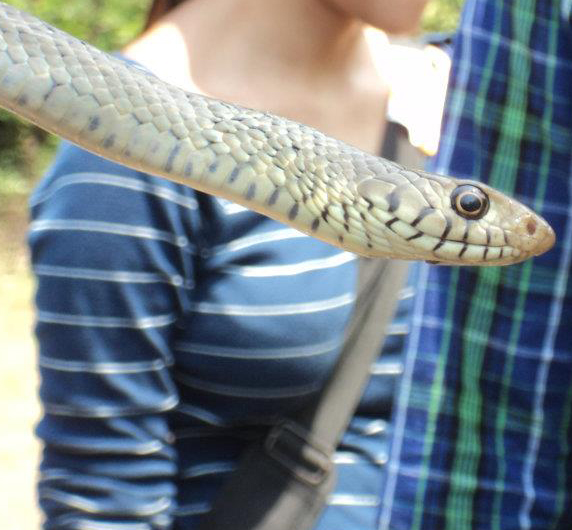 Rat snakes are non venomous. They are large, fast moving snakes which grow to a length of 2 ½ meters or more. Color varies from pale yellow, olive, brown, gray or black. There body is lightly or strongly marked with black; Marking usually distinct on tail. Lip scales usually separated by vertical black lines. Underside often has prominent dark cross-bars. Scales smooth or keeled (upper rows). Head is broader then neck. Large eye has round pupil. Rat snakes are found wherever rats and frogs/toads are prevalent. So, of course, they are often found in rice fields and in human habitation. As hill forests are cleared and agriculture spreads to the slopes, rat snakes too are spreading "upwards". Recent records say that they are found 2,000 meters up in plains. Formerly they were rarely seen above 1,000 meters.The rat snake is active during the day, hunting for rodents, frogs, toads and birds along fields and in bushes. Large rat snakes can give a painful bite and are quick to defend themselves.

This snake inhabits a wide range of habitats - coastal, arid, wet, mountainous, open fields as well as forests. Found throughout South and Southeast Asia, from Sea level to 4000m

The Indian rat snake is often mistaken for the cobra.