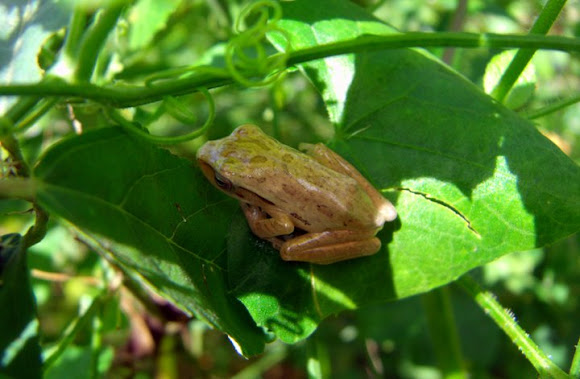 This small, elusive frog inhabits moist, lowland rainforest and freshwater swamp forest where it lives amongst streamside vegetation. By day it stays concealed amongst clumps of leaves or in tree crevices, but at dusk it emerges and positions itself on the upperside of large leaves, including tree ferns. Its call is a quiet 'chit, chit' which can be heard mainly around dusk and early evening. It has a relatively large head, and large eyes, and its snout is short and angular with a well defined ridge running from the eye to the snout. Its legs are long and slim, but when navigating amongst twigs and slender branches it prefers to 'walk' by carefully gripping the vegetation with its slender fingers and toes, rather than hop. Its dorsal colour is light brown with medium brown patches. A dark brown line extends from one eye to the other across the top of its head. Beneath each eye there is usually a white patch. On the underside of each thigh are tiny, bluish spots. The belly is generally pale yellow. The Blue-legged Bush Frog ranges from Peninsular Malaysia and Singapore to the islands of Sumatra and Borneo.