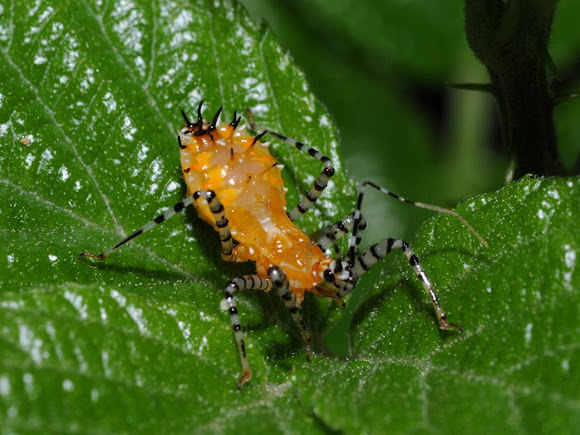 Adults are orange and boldly striped, as are some other juvenile assassin bugs. Distinctive as an adult: brown or orange with banded legs, head, and front of thorax. Edges of abdomen also banded. ---------------------- Blatchley (1926) (5) gives a description of the genus: •Rather stout species of medium size having the front lobe of the head about as long as hind one exclusive of the neck, hind lobe subglobose, abruptly constricted about its middle; antennae inserted above and in front of eyes, joints 1 and 3 subequal, each one-half longer than 2, 4 shortest, about one-half the length of 3; pronotum constricted in front of middle, its disk convex, front angles tuberculate, humeral angles armed with a short spine, hind margin in front of scutellum with a very wide notch or indentation; scutellum with apex more or less flattened and obtusely rounded; elytra reaching or slightly surpassing tip of abdomen; connexivum widely exposed, strongly reflexed. Male with last dorsal and ventral united to enclose the convex suborbicular genital plate, the apex of which is armed with an erect or oblique spine. About a dozen species are known, mostly from tropical America, three occurring in our territory. (information from BugGuide)