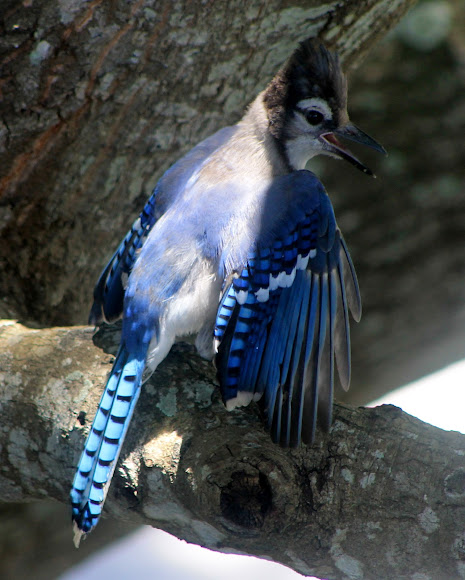 The Blue Jay measures 22–30 cm (9–12 in) from bill to tail and weighs 70–100 g (2.5–3.5 oz), with a wingspan of 34–43 cm (13–17 in).[3] There is a pronounced crest on the head, a crown of feathers, which may be raised or lowered according to the bird's mood. When excited or aggressive, the crest may be fully raised. When frightened, the crest bristles outwards, brushlike. When the bird is feeding among other jays or resting, the crest is flattened to the head.[4] Its plumage is lavender-blue to mid-blue in the crest, back, wings, and tail, and its face is white. The underside is off-white and the neck is collared with black which extends to the sides of the head. The wing primaries and tail are strongly barred with black, sky-blue and white. The bill, legs, and eyes are all black. Males and females are nearly identical.[5] As with other blue-hued birds, the Blue Jay's coloration is not derived from pigments but is the result of light interference due to the internal structure of the feathers;[citation needed] if a blue feather is crushed, the blue disappears as the structure is destroyed.[6] This is referred to as structural coloration. Blue Jays have strong black bills used for cracking nuts and acorns, and for eating corn, grains and seeds, although they also eat insects such as beetles, grasshoppers, and caterpillars.

The Blue Jay occurs from southern Canada through the eastern and central USA south to Florida and northeastern Texas. The western edge of the range stops where the arid pine forest and scrub habitat of the closely related Steller's jay (C. stelleri) begins. Recently, the range of the Blue Jay has extended northwestwards so that it is now a rare but regularly seen winter visitor along the northern US and southern Canadian Pacific Coast.[7] As the two species' ranges now overlap, C. cristata may sometimes hybridize with Steller's jay.[8] The northernmost subspecies C. c. bromia is migratory, subject to necessity. It may withdraw several hundred kilometers south in the northernmost parts of its range, but even northern birds do not necessarily move south, particularly in mild years with plentiful winter food. It migrates during the daytime, in loose flocks of 5 to 250 birds. The Blue Jay occupies a variety of habitats within its large range, from the pine woods of Florida to the spruce-fir forests of northern Ontario. It is less abundant in denser forests, preferring mixed woodlands with oaks and beeches.[4] It has expertly adapted to human activity, occurring in parks and residential areas, and can adapt to wholesale deforestation with relative ease if human activity creates other means for the jays to get by.[9]

this guy showed up in our oak tree , one of my sons was on the roof and told us to check it out, he was so close to him, My boyfriend came over and it flew to him , he sat on the wheel well of the trailer and this little guy poked at him a few times and then hopped on his arm, my other son came out and he checked him out, he got a handful of birdseed and this guy just hopped right in his hand to eat it, he also came on the roof to visit my son and me( after getting my camera I got on the roof to get better pics of him in the tree) I have seen scrubjays do this , but never a bluejay, Amazing , we all feel so blessed by this birds visit

All I know is the typical blue jay is very skittish around here, only Jays I have had a friendly encounter with are the scrubs
I have plenty of blue jays around, and this was very unusual

Jays are known for be social like that, although the jays in my area are not so. A crest on a California Towhee and an Eastern Phoebe? I think you are confusing a crest with breeding tufted.

Thanks. It was pretty cool

well I can get pretty close to a lot of wild animals,mostly because I am avid kayaker and they seem ok with me being up close, I had a younger pelican peck my hand one day out on the water, but this was in my front yard, was crazy,buy maybe a rehabilitated one, I looked to make sure it wasn't injured in some way,he looked healthy

I've had animals from the wild come near me like that too...once a grackle....once a ferret. I found out that they had been rehabilitated at a nearby rehab center..it was so strange when it occurred.
Might that have happened?

I think he was also, you can tell he was young, all the blue jays I have encountered fly away as soon as they see me reach for my camera, lol, except the Scrub Jays they are very personable and people friendly, probably not a good thing, but they are the only one's of the "jays" I encountered that would allow any human contact , This guy was unusual,I think he wanted to be on fb and project noah, lol, we are all still floating high from our encounter

I just had a glimpse of a similar bird in a creek and I remember saying to myself,"What a beauty"
i have noticed that many birds do have a little crest on the head,which they display occasionally. I have seen a phoebe and a California Towhee display crests.

I took 50 plus pictures of this guy, I wish I could load more, he was amazing

he was so personable, he was doing his feathers all kinds of ways, he was very entertaining, and for him to land on my boyfriend and son, was amazing to us

no I believe it is a blue jay, I looked up steller jay just to be sure, but the pictures of that show the bird to be all blue