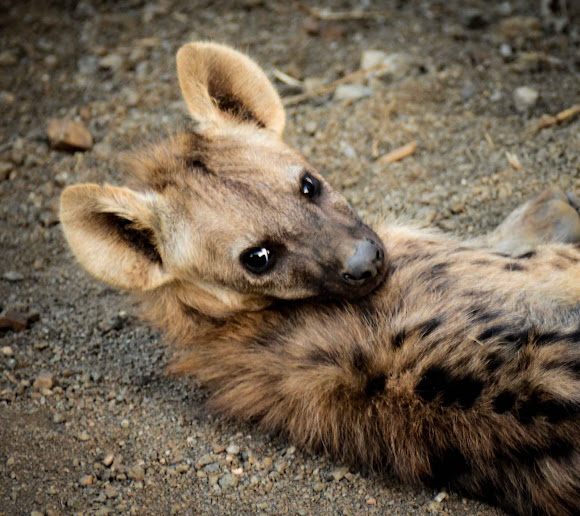 This young hyena are about to explore the world. A caterpillar caught his interest and he just had to investigate it. He learned his lesson the normal way for young ones, his nose was burning after sniffing the furry little creature on the ground. No more caterpillars for this gorgeous little hyena!

Hyena family with two small had their den in a small irrigation system under one of the roads in the national park.

The spotted hyena is the largest member of the Hyaenidae, and is further physically distinguished from other species by its vaguely bear-like build. It is also unique due to the presence of a pseudo-penis in the female. It is the only mammalian species to lack an external vaginal opening. The spotted hyena is the most social of the Carnivora in that it has the largest group sizes and most complex social behaviours. The spotted hyena is a highly successful animal, being the most common large carnivore in Africa. Its success is due in part to its adaptability and opportunism; it is primarily a hunter but may also scavenge, with the capacity to eat and digest skin, bone and other animal waste. In functional terms, the spotted hyena makes the most efficient use of animal matter of all African carnivores.

Thank you Saumya and Sintija.
Sintija, dont you think that we would have done the exact same thing if we were hyenas? :))

Wonderful photos, Tiz!!!! :)))
Especially those with hyena and caterpillar :))))

Thank you so much Leuba, Kel, Dilan, Dotun, Chamalka, Luis, Doreen and Gilma for your fantastic comments!

Congratulations on the SOTD, Tiz. It is so cute!!
Also thank you for all the information on the species all very interesting and nice to know.

Thank you for the honor of the spotting of the day to Yasser and the PN team. Project noah member are not the only ones liking caterpillars :)
Thank you for your greetings and supportive comments. You are simply fantastic Maria dB, Tom, Beaker, António, Suzmonk, LaurenZarate, EnvUnlimited, Mac, Johan, Daniele and Bhagya!

This was the best start of the wonderful year of 2014! A year that will be full of big and small nature encounters for all of us :)

Such a cute series Tiz, great timing too! Congratulations!

Congratulations, Tiz, another Spotting of the Day ... you're a star!

Tiz,my friend,awesome ,you did it again,very well deserved SOTD,congrats and thanks for sharing sucha a diverse and wild life in your spotting page,always with a nice story and great info

Congrats Tiz on an informative and funny SOTD!

What a gorgeous little pup! Awesome series. Congrats on SOTD!

Congrats Tiz! This little pup's learning moment has been selected as Spotting of the Day! What a great series and I can't blame the little hyena for being so curious. Caterpillars are awesome!