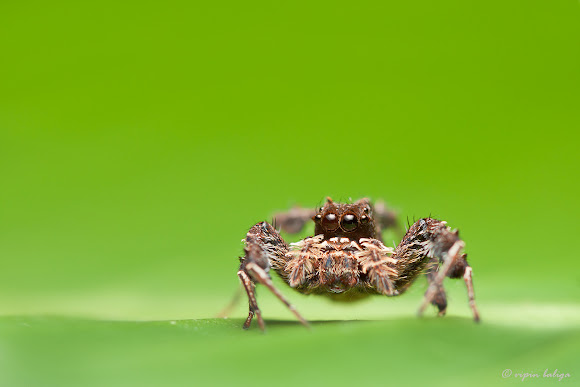 At last..... I found her..!!! Beauty with brains I would say... :-) Members of the genus Portia have been called "eight-legged cats" as their hunting tactics are as versatile and adaptable as a lion's... Considered the most measurably "intelligent" and among the most highly evolved of all arachnids, these amazing creatures prey almost exclusively upon other, often far larger spiders, and employ a wide variety of hunting techniques to overcome such formidable food; techniques that the same individual chooses and even modifies depending on its prey. Against one spider, a Portia may imitate the movements of an insect caught in their web. Against another, the same Portia may replicate the complex mating dance of the victim's species. They memorize every encounter, visually identify the species of their prey and pick whatever method was successful in the past. Faced with a new species, they test different actions, gauge the prey's reaction and determine the best strategy through trial and error...possibly devising a course no other Portia may ever fully duplicate. Portia have been observed constructing small webs of their own, but these are usually attached to the webs of larger spiders. When an insect gets caught in this addition, the Portia is actually using it as bait for the other arachnid. Some are also known to hunt the spitting spiders described on our previous page, and prefer to target mothers who are unable to spit while they carry eggs or young in their jaws. Against active hunters such as other jumping spiders, they behave like a dead leaf and move only with the breeze!!! A Portia can pluck another spider's web with a virtually unlimited range of signals, either to lure the prey out into the open or calming the prey by monotonously repeating the same signal while the Portia walks slowly close enough to bite it. Such tactics enable Portia species to take web spiders from 10% to 200% of a Portia′s size,and Portia species hunt in all types of webs.

excellent image and info as well

Wonderful spotting and such interesting information! Could you please state where the information is from as you copied it (for example, there is a reference to "described on our previous page")? Credit should be given to that source if they do not have copyright limitations. Thanks!