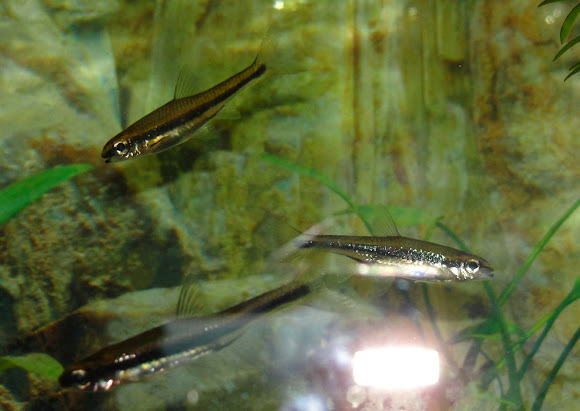 A small fish that only reaches 2.5 inches in length, the ironcolor shiner is colorful with straw yellow above, a dusky stripe along the back and a silvery-white color below. A very prominent black stripe runs along the side, beginning at a black spot at the base of the tail and continuing around the snout, covering both lips and its chin. The inside of the mouth is black. Scales are darkly outlined except just above the black stripe where a gold-orange streak may be present. Breeding males often have an orange-gold body and fins. Spawning occurs from mid-April through July in the northern part of its range and as late as September in Florida. During daylight hours, the males chase the females in areas of little or no current and the eggs are broadcast into open water. Ironcolor shiners swim in open water in medium-sized schools of mixed year classes. They feed on small aquatic and terrestrial insects, and other invertebrates.

The ironcolor shiner has been observed in deep pool areas of creeks and small rivers, as well as in bodies of water where a moderate current exists. They occur in areas with aquatic vegetation, such as bladderwort, pondweed and Elodea. Sand seems to be important for spawning.

Because only a single population is found in New York State, the ironcolor shiner is very vulnerable should a catastrophic event occur.