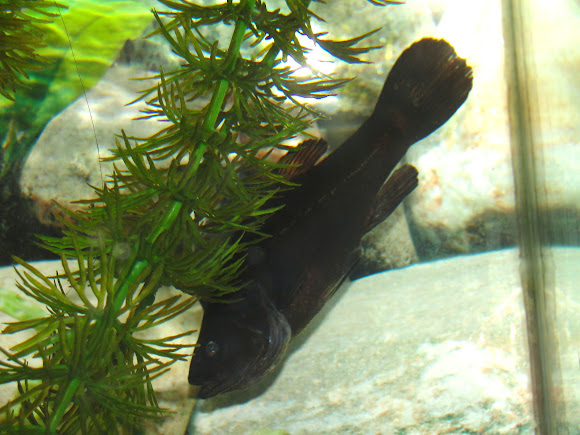 This small fish 5.5 in, is native to the eastern half of North America. It is dark brown, sometimes with a darker band near the base tail. A unique feature of this fish is the forward placement of its cloaca, under the head, anterior to the pelvic fins. This placement allows the females to place their eggs more precisely into root masses. The pirate perch is known to consume food items have included live mosquito larva, amphipods, glass shrimp, meal worms, small fish, dragon fly and stone fly larva and earthworms. It is generally assumed that most breeding occurs around early April until May. When breeding, pirate perch use underwater root masses as the microhabitat for their larvae. Females have been observed thrusting their heads into sheltered canals of underwater root masses and releasing eggs. The male perch then come to these sites, enter the canal head first, and proceed to fertilize the eggs in the same manner they were lain. Females can lay anywhere between 100-400 eggs which is dependent on the body size. They are able to reproduce after one year, and can live up to 4 years in the wild.

The pirate perch is a fish of weedy habitats and sluggish waters. During high flows, it seeks refuge under overhanging banks and in weed beds. The western form prefers sluggish areas such as oxbows, marshes, and overflow ponds where the bottom is soft muck with much organic matter and timber debris.

The western subspecies is apparently rare in New York and seems to be a relict species that has survived post glacial time in a few isolated pockets of favorable environment. Its nearest neighbors are in southwestern Ohio. The eastern subspecies is abundant at several localities on Long Island.