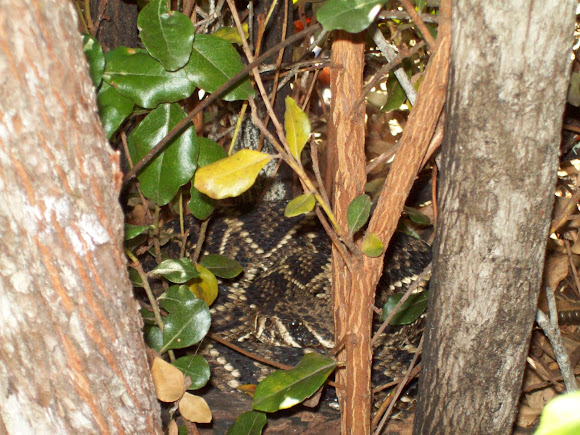 The eastern diamondback is the heaviest and largest venomous snake in the Americas. They range in size from 3.5 to 6 feet long. They can be shades of brown or olive color with a series of 24-35 dark brown to black diamonds with slightly lighter centers. Each of these diamond-shaped blotches is outlined with a row of cream or yellowish scales. The tail has 5-10 bands. The belly is a yellowish or cream colored. The diamondback is primarily terrestrial and not suited to climbing. They are excellent swimmers. When threatened, they can raise half their body off the ground in an s-shaped coil. It can strike to a distance of at least a third of their body length and may strike multiple times. If given the opportunity, they will usually retreat from people. According to some accounts, wild pig hunt diamondbacks by listening for the rattle. The more silent snakes have survived causing the natural selection of snakes that don't give a warning rattle. Diamondbacks feed on small mammals, like rabbits and rats and birds. Prey is struck and released, after which they follow the scent trail left by the dying prey. They swallow their prey whole. Their venom contains potent hemotoxin which kills red blood cells, causes damage to the tissue and severe pain. Bites can be fatal to people depending on the amount of venom injected into the bite and access to emergency treatment and anti-venom. Younger rattlesnakes tend to be more aggressive and less in control of the amount of venom they inject. These snakes are ovoviviparous which means they produce living young from eggs that hatch within their body. The gestation period is six-seven months and then the female gives birth to around 7-20 offspring. The newborns are 30-40 inches in length and they are left to fend for themselves within a few hours of their birth.

I encountered this diamondback while hiking in a dry scrub hammock near Crabgrass Cemetery. It was a warm dry October morning. The snake was stretched out at ground level in a tree size bush. I was searching for a geocache and this snake just happened to be sitting right on the container I was seeking. In my pictures you can see a small container wrapped in camouflage tape next to the snake. I was within 2-3 feet of it before I saw the distinctive diamond back pattern, but it did not strike or take up a threatening pose. It slowly pulled its body into a coil in the center of the bush with its head low and resting on its body. We retreated from the area and hiked for several hours. We very cautiously checked the bush about 3 hours later and the snake was still there.