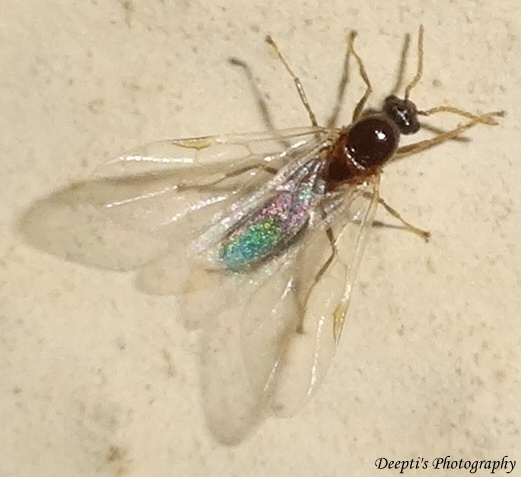 This winged ant has a beautiful blend of blue, green and pink tinge on its wings, which is visible under certain angles only.

Size: 8 mm. Attracted to porch light, it was spotted on the wall, two days after heavy downpour.

All ant species include three castes - queens, males and workers. Female winged ants are larger than male winged ants. Worker ants, or infertile female ants, are commonly seen crawling and foraging for food. Some species of ants have winged worker ants, while other species do not. There can be thousands of winged ants in one established colony. These winged ants often are called alates, swarmers or reproductives. All ant species live in colonies established by fertile females, or queens. Winged female ants and males typically swarm after a day of heavy rain in a particular season. Queens begin as winged ants and usually shed their wings after mating. Reproductive males die soon afterward.