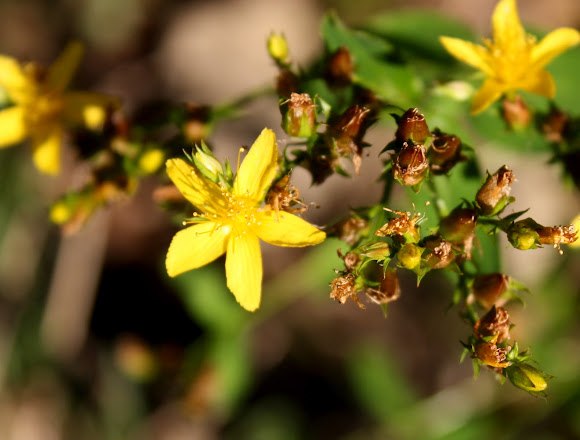 Hypericum perforatum is a yellow-flowering, stoloniferous or sarmentose, perennial herb indigenous to Europe, which has been introduced to many temperate areas of the world and grows wild in many meadows. The common name comes from its traditional flowering and harvesting on St John's day, 24 June. The genus name Hypericum is derived from the Greek words hyper (above) and eikon (picture), in reference to the traditional use of the plant to ward off evil, by hanging plants over a religious icon in the house during St John's day. The species name perforatum refers to the presence of small oil glands in the leaves that look like windows, which can be seen when they are held against the light. St John's wort is a perennial plant with extensive, creeping rhizomes. Its stems are erect, branched in the upper section, and can grow to 1 m high. It has opposing, stalkless, narrow, oblong leaves that are 12 mm long or slightly larger. The leaves are yellow-green in color, with transparent dots throughout the tissue and occasionally with a few black dots on the lower surface. Leaves exhibit obvious translucent dots when held up to the light, giving them a ‘perforated’ appearance, hence the plant's Latin name. Its flowers measure up to 2.5 cm across, have five petals, and are colored bright yellow with conspicuous black dots. The flowers appear in broad cymes at the ends of the upper branches, between late spring and early to mid summer. The sepals are pointed, with glandular dots in the tissue. There are many stamens, which are united at the base into three bundles. When flower buds (not the flowers themselves) or seed pods are crushed, a reddish/purple liquid is produced.

St John's wort (traditionally /ˈsɪndʒənzwɜrt/ sin-jənz-wurt; now commonly /wɔrt/, as spelt) is the plant species Hypericum perforatum, and is also known as Tipton's weed, chase-devil, or Klamath weed. With qualifiers, St John's wort is used to refer to any species of the genus Hypericum. Therefore, H. perforatum is sometimes called common St John's wort to differentiate it. The species of Hypericum are classified in the Hypericaceae family, having previously been classified as Guttiferae or Clusiaceae.[1][2] Approximately 370 species of the genus Hypericum exist worldwide with a native geographical distribution including temperate and subtropical regions of North America, Europe, Turkey, Russia, India, China and Brazil. St John's wort is widely known as an herbal medicine for treating mild forms of depression

St John's wort reproduces both vegetatively and sexually. It thrives in areas with either a winter- or summer-dominant rainfall pattern; however, distribution is restricted by temperatures too low for seed germination or seedling survival. Altitudes greater than 1500 m, rainfall less than 500 mm, and a daily mean January (in Southern hemisphere) temperature greater than 24 degrees C are considered limiting thresholds. Depending on environmental and climatic conditions, and rosette age, St John's wort will alter growth form and habit to promote survival. Summer rains are particularly effective in allowing the plant to grow vegetatively, following defoliation by insects or grazing. The seeds can persist for decades in the soil seed bank, germinating following disturbance spotted in the PNPGerês,in the Vidoeiro camping park

Wow,great use :) here it's used by the people for liver problems

My great grandfather used to make snaps from it :)

Emma the last link you gave me is of my spotting :)

if you follow the link Jannette give in the id there are all info's about medicinal uses :)

Thanks Emma, from this one they make the most tipical medicinal tea of Gerês hipericão we call it,good for many things,in futur i'll spott this more times and i'll includ the medical info's they are a enormous text,do you have spottings of those you talk that you saw?

lovely flower. Always like to see one! though the two species that I have seen here are very different from this flower.

Thanks Maria
thanks Jannette for the id