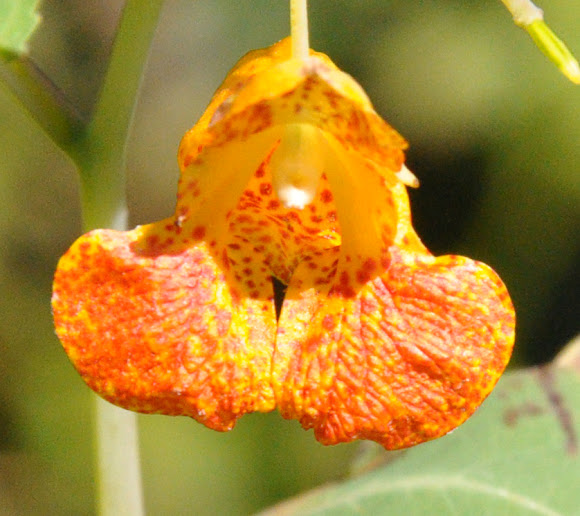 This native plant is a summer annual about 3-6' tall, branching frequently. The somewhat succulent stems are light green, glabrous, and glaucous. The alternate leaves are up to 4" long and 2" across. They are ovate, hairless, and serrated along the margins; their slender petioles are up to 2" long. From the axils of the middle to upper leaves, short racemes of 1-3 flowers are produced. Each flower is about 1–1¼" long, consisting of 5 petals, 3 sepals, and reproductive organs within the tubular corolla. This corolla is yellow, or less often cream-colored, and consists of the fusion (or near fusion) of the 5 petals and lower sepal. The lower sepal is petaloid; it defines the conical posterior of the corolla, which tapers to a tiny nectar spur that curls downward. The upper petal defines the upper lip (or hood) of the corolla, while the two lower petals form a pair of well-rounded lobes that are rather irregular and wrinkled. Two small lateral petals define the sides of the corolla opening, although they are difficult to see when the flowers are viewed from above. There are usually reddish brown spots within the interior of the corolla, although they are sometimes absent. The upper 2 sepals are light green and ovate in shape; they are located at the top of the corolla, rather than behind or underneath. Each flower dangles from a slender pedicel about ¾" long. The blooming period occurs from mid-summer to early fall and lasts about 2-3 months. Each fertilized flower is replaced by an ellipsoid seedpod up to 2" long. This seedpod is broadest toward the middle, tapering toward its tips; it has several dark green lines along its length. As the seedpod ripens, it splits open and ejects the seeds. The root system consists of a shallow branching taproot. Touch-Me-Not family (Balsaminaceae)