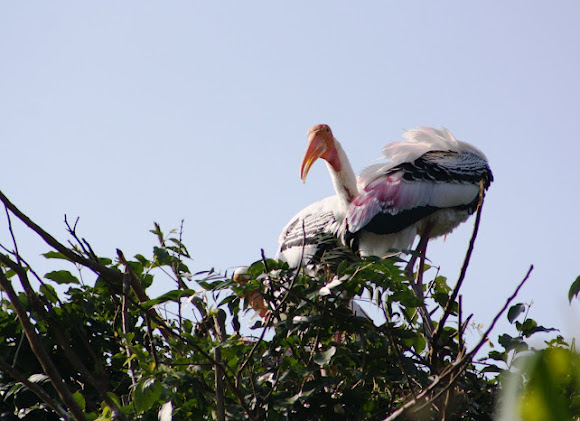 The Painted Stork (Mycteria leucocephala) is a large wading bird in the stork family. It is found in the wetlands of the plains of tropical Asia south of the Himalayas in South Asia and extending into Southeast Asia. Their distinctive pink tertial feathers give them their name. They forage in flocks in shallow waters along rivers or lakes. They immerse their half open beaks in water and sweep them from side to side and snap up their prey of small fish that are sensed by touch. As they wade along they also stir the water with their feet to flush hiding fish. They nest colonially in trees, often along with other waterbirds. They only sounds they produce are weak moans or bill clattering at the nest. They are not migratory and only make short distance movements in some parts of their range in response to food and for breeding. Like other storks, they are often seen soaring on thermals.

The Painted Stork is widely distributed over the plains of Asia. They are found south of the Himalayan ranges and are bounded on the west by the Indus river system where they are rare and extend eastwards into Southeast Asia. They are absent from very dry or desert regions, dense forests and the higher hill regions. They are rare in most of Kerala and the species appears to have expanded into that region only in the 1990s. They are mainly seen on freshwater wetlands although they sometimes forage on the coast. They are resident in most regions but make seasonal movements. Young birds may disperse far from their breeding sites and a juvenile ringed at nest in Keoladeo National Park has been recovered 800 kilometres away in eastern India.

Lovely photo of a painted stork