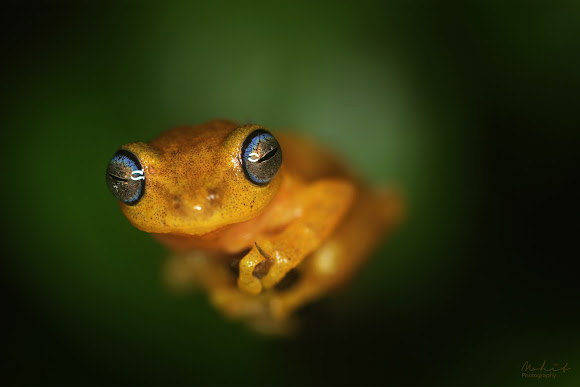 Blue-eyed Bush Frog or Coorg Yellow Bush Frog is a species of frog endemic to southern western ghats of the state of Karnataka, India. These frogs are nocturnal and are found on the trees. Their calls are like, "trrr... tuk tuk tuk". The dominant colour form is yellowish brown with light-brownish lines or light-yellowish with discontinuous light-brown lines, but some individuals may be almost golden yellow with only faint spots. The iris is light brown encircled with a bluish green outer ring. (Info:wiki)

Endemic to rainforests of western ghats of India. They are only found in the state of Karnataka. They live on trees.

First two photographs are single individual which is a light yellow morph. Third photograph is a dark morph with fully distended vocal sac.

Wow! Thank you Ashley and Project Noah team. I am glad to see this beautiful amphibian making it to the top 10 amphibian spottings in the '2015 Best Wildlife Photo' mission. :) :)

Congrats Mohit, your beautiful Blue-eyed Bush Frog has made the top 10 amphibian spottings in the '2015 Best Wildlife Photo' mission! Rangers are voting on the top 10 amphibian spottings, and the top 3 will be announced on February 2nd. The top 3 spottings will be commented on here on the site, but make sure you keep a look out on our Facebook app page for the announcement as well! Congratulations on making the top 10! https://www.facebook.com/projectnoah

@Fyn Kynd:
Thank you so much for the nomination. I am looking forward to it being showcased at spotting of the week. :)

Lovely spotting ! thanks for sharing.

Awesome photos! What a cool frog.