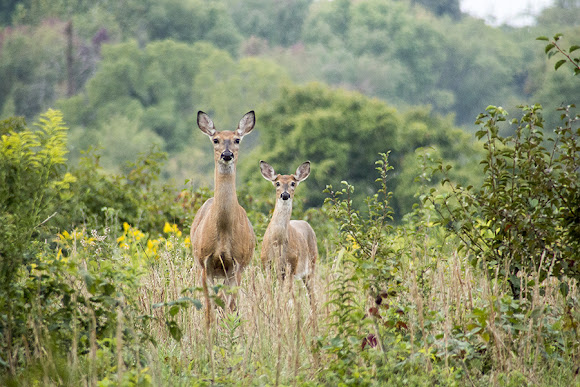 Female Doe with male fawn (age unknown) The deer's coat is a reddish-brown in the spring and summer and turns to a grey-brown throughout the fall and winter. The deer can be recognized by the characteristic white underside to its tail, which it shows as a signal of alarm by raising the tail during escape.

White-tailed deer are generalists and can adapt to a wide variety of habitats.[14] The largest deer occur in the temperate regions of Canada and United States. The Northern white-tailed deer (borealis), Dakota white-tailed deer (dacotensis), and Northwest white-tailed deer (ochrourus) are some of the largest animals, with large antlers. The smallest deer occur in the Florida Keys and in partially wooded lowlands in the neotropics. Although most often thought of as forest animals depending on relatively small openings and edges, white-tailed deer can equally adapt themselves to life in more open prairie, savanna woodlands, and sage communities as in the Southwestern United States and northern Mexico. These savanna-adapted deer have relatively large antlers in proportion to their body size and large tails. Also, there is a noticeable difference in size between male and female deer of the savannas. The Texas white-tailed deer (texanus), of the prairies and oak savannas of Texas and parts of Mexico, are the largest savanna-adapted deer in the Southwest, with impressive antlers that might rival deer found in Canada and the northern United States. There are also populations of Arizona (couesi) and Carmen Mountains (carminis) white-tailed deer that inhabit montane mixed oak and pine woodland communities.[15] The Arizona and Carmen Mountains deer are smaller but may also have impressive antlers, considering their size. The white-tailed deer of the Llanos region of Colombia and Venezuela (apurensis and gymnotis) have antler dimensions that are similar to the Arizona white-tailed deer.