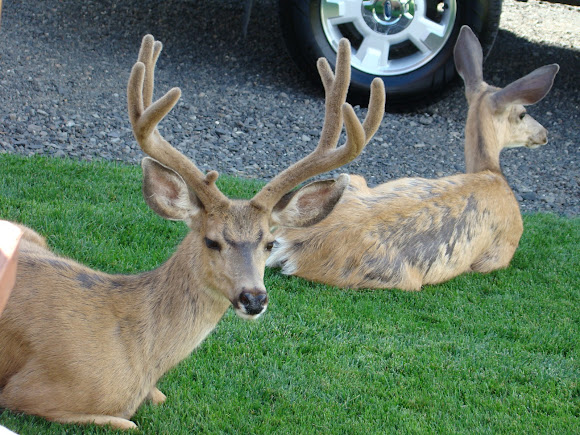 Buck & Doe resting in our yard or black-tailed deer is a deer indigenous to western North America, named for its large mule-like ears. There are believed to be several subspecies, including the black-tailed deer.[2][3][4][5][6][7] Unlike its cousin, the white-tailed deer, mule deer are generally more associated with the land west of the Missouri River, and more specifically with the Rocky Mountain region of North America. Mule deer have also been introduced to Argentina. The most noticeable differences between whitetails and mule deer are the size of their ears, the color of their tails, and the configuration of their antlers. In many cases, body size is also a key difference. The mule deer's tail is black-tipped, whereas the whitetail's is not. Mule deer antlers are bifurcated; in other words, they "fork" as they grow, rather than branching from a single main beam, as is the case with whitetails. Each spring, after mating season, a buck's antlers start to regrow almost immediately after the old antlers are shed. Shedding typically takes place in mid February, with variations occurring by locale. Although capable of running, mule deer often prefer to stot, with all four feet coming down together. Black-tailed deer have also been introduced to Kauai (Hawaii). The mule deer is the larger of the two Odocoileus species on average, with a height of 80–106 cm (31–42 in) at the shoulders and a nose-to-tail length ranging from 1.2 to 2.1 m (3.9 to 6.9 ft). Of this, the tail may comprise 11.6 to 23 cm (4.6 to 9.1 in). Adult bucks (male deer) normally weigh 55–150 kg (120–330 lb), averaging around 92 kg (200 lb), although trophy specimens may weigh up to 210 kg (460 lb). Does (female deer) are rather smaller and typically weigh from 43 to 90 kg (95 to 200 lb), with an average of around 68 kg (150 lb).[8][9][10][11] Unlike the whitetail, the mule deer does not generally show marked size variation across its range, although environmental conditions can cause considerable weight fluctuations in any given population. An exception to this is the subspecies, the Sitka black-tailed deer (O. h. sitkensis). This race is markedly smaller than other Mule Deer, with an average weight of 54.5 kg (120 lb) and 36 kg (79 lb) in males and females, respectively.[12]

Mule deer utilize a wide variety of plant foods, and their preferences vary widely geographically as well as seasonally, but they are primarily browsers on woody vegetation and eat relatively little grass. They readily adapt to agricultural products and landscape plantings.[14][15] In summer, Mule Deer chiefly forage on not only herbaceous plants, but also various berries (including blackberry, blueberry, salal, and thimbleberry). They also use grasses more than in winter.[15] Mule deer are known to forage in summer on California Buckeye leaves, even though there is some evidence of that plant's toxicity.[16] Mule Deer grazing in Zion National Park A Mule Deer buck grazing near Leavenworth, Washington A Mule Deer doe grazing in Alberta, Canada In winter, these deer forage on conifers (especially Douglas-fir, cedar, Taxus yews, juniper), and twigs of deciduous trees and shrubs (esp. aspen, willow, dogwood, serviceberry, and sage). In season, they eat acorns and apples. Over much of the species range, snow and ice cover many food sources and the food that is accessible grows slower. The deer's metabolism slows and individuals become less active to survive in an environment with less food. A large fraction of the deaths in a mule deer population occur in the winter, especially during the first year of life.[citation needed] During the winter, mule deer often move down from mountains, where the snow is deeper and covers most of the food, into valleys where there is less snow. Sometimes, in response to perceived distress, concerned people create feeding programs. Such supplemental feeding efforts may be harmful if not properly implemented.[17] Supplemental feeding helps mule deer make it through a severe winter if the feeding is started early, long before the mule deer show signs of malnutrition or starvation. To effectively feed mule deer requires a three to four month commitment because it has to be started before poor range conditions and severe weather cause malnourishment. It must be continued until range conditions can support the herd. [18] Mule deer rarely travel far from water or forage, and often bed down within easy walking distance of both. Young mule deer generally forage together in family groups; older bucks tend to travel alone or with other bucks. Most actively foraging around dawn and dusk, they usually bed down in protected areas mid-day, but will also forage at night in more open agricultural areas, during full moons, or when pressured by hunters. Repeated beds will often be scratched level, about the size of a washtub. Temporary beds will seem little more than flattened grassy grounds