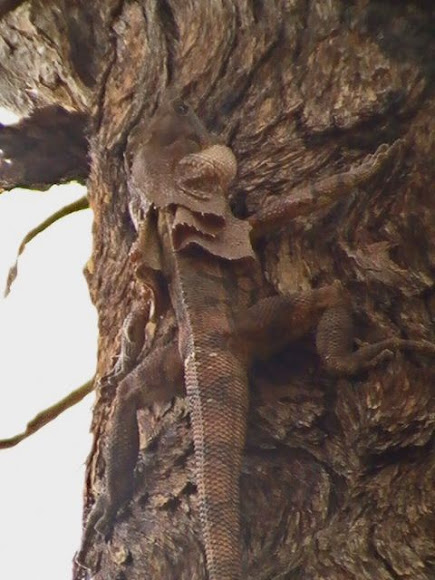 The frill-necked lizard is so called because of the large ruff of skin which usually lies folded back against its head and neck. The neck frill is supported by long spines of cartilage which are connected to the jaw bones. When the lizard is frightened, it gapes its mouth, exposing a bright pink or yellow lining; the frill flares out as well, displaying bright orange and red scales. This reaction is often used to discourage predators or during courtship. The lizard is a member of the agamid family. It is a relatively large lizard, growing up to 91.4 (2ft 9 inches) cm.[1] The lizard is also capable of bipedal locomotion.

Found mainly in northern Australia and southern New Guinea. This species is the only member of the genus Chlamydosaurus. Its name comes from the large frill around its neck, which usually stays folded against the lizard's body. It is largely arboreal, spending the majority of the time in the trees. The lizard's diet consists mainly of insects and small vertebrates.