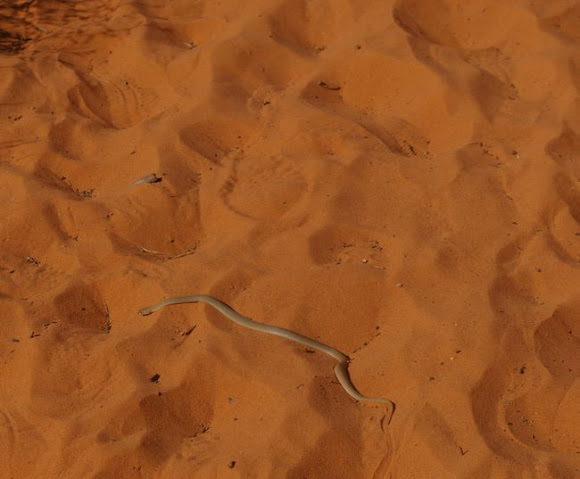 One of my rarest spotting : Western Taipan, also called Inland Taipan or Fierce Snake is a variably coloured snake with a seasonal colour change from pale yellowish to dark brown. Seem to be a juvenile.

It is a rare snake, found in inland south-western Queensland in Cooper Creek drainage, around Coober Pedy and in north-eastern areas of South Australia.

Its venom is the most toxic known for any terrestrial snake in the world, but it is a shy snake and rarely willing to bite ( DEAD IN 6 MINUTES), even if provoked. I was walking through the valley when it appears quickly out of the little bush, crossing my path just 2.5 m from me...My camera on hands, I just had the time to shot quickly before it diseppear. He was probably as scared as me and I tried to find him again but it vanished throuth the bush...

This is not an inland taipan. It appears to be an adult ringed brown snake (Pseudonaja modesta). As adults they often loses the black rings.
Inland taipans are restricted to the blacksoil plains of SW Qld and SA and have never been recorded in the Northern Territory.
Also, unless severely allergic to the venom, no Australian snake (including the inland taipan) will kill a human in 6 minutes. If this were true, there would have been plenty of snake handlers killed by them by now as it takes a lot longer than 6 minutes to reach a hospital.
I am not trying to be mean, but misinformation creates a lot of fear.

What an awesome spotting.