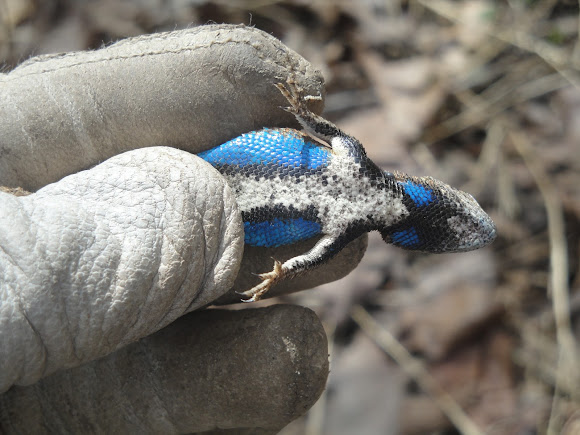 In MO the fence lizard has been reclassified and renamed as its own species rather than a sub-species of the S. undulatus. I think that's pretty cool. They do still look similar to the S. undulatus, with the typical fence lizard dorsal pattern. The bellies and throat (as shown in this pic) of males during the breeding season are bright blue (almost turquoise) with a black border. Sometimes females and juveniles will almost have some pattern on their bellies, but it wont be this distinct. They have keeled scales which gives them a rough texture and they are excellent climbers.

Missouri Ozarks, forest. They're not called "fence" lizards for nothing, but you can find them hanging onto trees as well. At night look for them sleeping on top of leaves out of raccoon range.

Just a nerdy herp thing, look up the etymology on sceloporus, its pretty cool. And look for the "third eye" that Sceloporus lizards have (it helps them regulate their exposure to sunlight, which helps to regulate their metabolism).