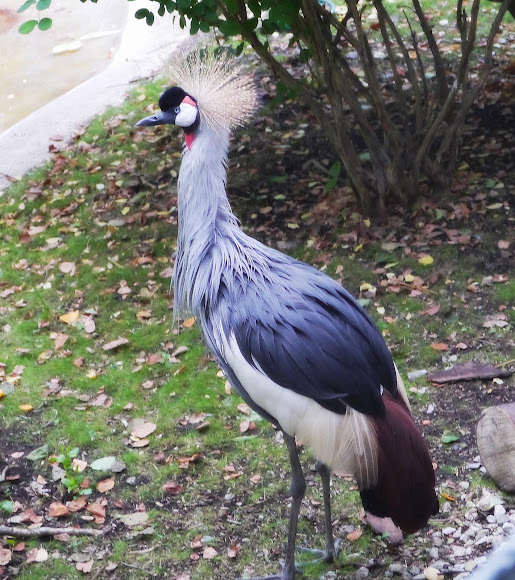 The Grey Crowned Crane (Balearica regulorum) is a bird in the crane family Gruidae. It occurs in dry savannah in Africa south of the Sahara, although it nests in somewhat wetter habitats. This animal does not migrate. There are two subspecies. The East African B. r. gibbericeps (Crested Crane) occurs from eastern Democratic Republic of the Congo through Uganda, of which it is the national bird, and Kenya to eastern South Africa. It has a larger area of bare red facial skin above the white patch than the smaller nominate species, B. r. regulorum (South African Crowned Crane), which breeds from Angola south to South Africa.

The Grey Crowned Crane is about 1 m (3.3 ft) tall and weighs 3.5 kg (7.7 lbs). Its body plumage is mainly grey. The wings are also predominantly white, but contain feathers with a range of colours. The head has a crown of stiff golden feathers. The sides of the face are white, and there is a bright red inflatable throat pouch. The bill is relatively short and grey, and the legs are black. The sexes are similar, although males tend to be slightly larger. Young birds are greyer than adults, with a feathered buff face.

Thanks Jerry! This beautiful crane was captured in Columbus Zoo In Columbus,Ohio.