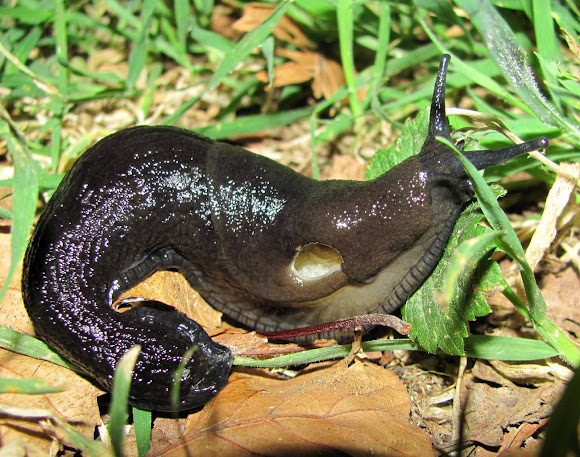 The size of the adult slug is 80–120 mm.[8] The colour of the Spanish slug is brownish or reddish brown, or brightly orange.[8] The tentacles are darker. Colouration varies, but not within the same population.[8] Adults differ little from Arion rufus, in contrast to the brightly coloured and banded juveniles that allow reliable determination of this species.[8] Reproductive system: The atrium is small.[8] The oviduct is large and swollen, with the same diameter as atrium.[8] The spermatheca is spherical, its diameter twice of oviduct.[8] The long, anteriorly swollen oviductus with large longitudinal ligula inside is distinctive of Arion vulgaris.[8] When disturbed, the slugs will emit copious amounts of mucus. When killed in boiling water (one of several methods used in the fight against the species as an invasive organism), the mucus will colour the water yellow.

The native distribution of Arion vulgaris is not exactly known. Some sources have claimed northern Spain in Iberian Peninsula, western France and southern England,[2] but provided no published references for these assumptions. In Britain the slug was first recorded in 1954,[3] which does not indicate native distribution there. Reliable records from Spain probably do not exist. Moquin-Tandon described the species originally from France without exact indication of the locality, presumably western or southwestern France. [edit]Non-indigenous distribution The non-indigenous distribution of Arion vulgaris includes whole Western Europe, Central and Northern Europe. Its distribution includes also various parts of Southern Europe and of Eastern Europe.[2] Arion vulgaris is also known from the USA since 1998.[2]

The Spanish slug was identified as Arion lusitanicus when it was first reported as an invading species in France in 1956.[10] This was most probably a case of misidentification. In slugs it is often difficult to establish good criteria for identifying species using external features or internal features, as colouration can be quite variable, and the rather plastic anatomy makes diagnostic anatomical features difficult to establish. Current consensus is that the true Arion lusitanicus is a microendemic species of the Serra da Arrábida mountains south of Lisbon, Portugal.[11] A close analysis of slugs from the site in Portugal from where it was originally described by Jules François Mabille in 1868, showed that the true A. lusitanicus differed from the central European invader in its internal anatomy, the shape of the spermatophore and the number of chromosomes.[12] The invader was identified in 1997 as Arion vulgaris, which had been described by Moquin-Tandon in 1855 from an unrecorded site in France, presumably from western or southwestern France. The results of these studies were first published in a local journal in Spain.[11] The news were not noticed outside Spain until they were mentioned in a widely dispersed atlas of British molluscs.[3] Still today we are confronted with the Central European invader being reported as having originally been introduced with vegetables from Spain. These reports are usually based on outdated information published in pre-1999 literature. Often this can be recognised by the name A. lusitanicus being used for the species, instead of A. vulgaris. Its common name "Spanish slug" was also based on the unsubstantiated assumption that the species would not only live in Portugal, but also in Spain. Portugal had less intensive economical trade connections with France. Actually Arion lusitanicus had never been reliably reported from Spain. spotted in river Homem Félinhos beach

Thanks NatralList for the id

yeap in the other two spottings i post in the comments above, we can see it to :)

So you were lucky to see it open!

Natralist has an Id for your snail!!
The white cavity,is it used for breathing?

Thanks Luis for your kind words :)

i,ve been searching in the last days for a id ,i have more than one spotting of a black slugg like this one but it's tricky,in the end i cant decided my self beetwen the 3 hipotesys,i have to see more images ,i put here the other 2 spottings of these kind of slugs,one is id as a arion rufus(european red slug) but after seeing your tip for arion ater,i dont know anymore what to think :)
http://www.projectnoah.org/spottings/132...
http://www.projectnoah.org/spottings/804...

it's either arion vulgaris or arion rufus, depending on ths size. adults of arion vulgaris get up to 12 cm in length and arion rufus even 15 cm. concerning it is allmost black, it could be even arion ater, whose size would be between the above mentioned. the only thing i can say for sure, is, that it is a arion "something". and gross to touch.

You should add this to the Opisthobranch mission