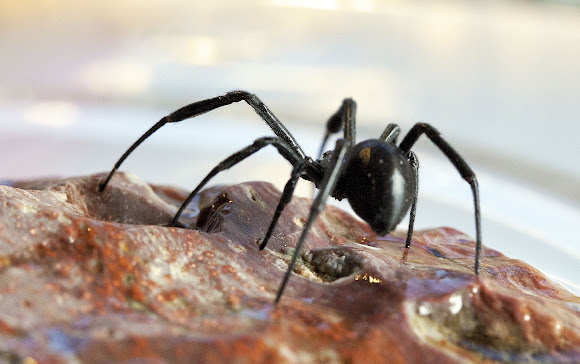 In common with other members of the Theridiidae family, the widow spiders construct a web of irregular, tangled, sticky silken fibers. The spider very frequently hangs upside down near the center of its web and waits for insects to blunder in and get stuck. Then, before the insect can extricate itself, the spider rushes over to bite it and wrap it in silk. If the spider perceives a threat, it will quickly let itself down to the ground on a safety line of silk. As other web-weavers, these spiders have very poor eyesight and depend on vibrations reaching them through their webs to find trapped prey or warn them of larger threats. While there are some more aggressive species, most are not; many injuries to humans are due to defensive bites delivered when a spider gets unintentionally squeezed or pinched. Some bites are thought to result from a spider mistaking a finger thrust into its web for its normal prey, or in cases where a female is protecting an egg sac, but ordinarily intrusion by any large creature will cause these spiders to flee.

Great series! I love the detail in your photos! I would like to invite you to join and add your spottings to the Wildlife of Idaho mission. Here's the link for you: http://www.projectnoah.org/missions/1888...

Thanks Meredith. If that bothers you don't watch the video!

Spiders creep me out so much, but this is too gorgeous a photo to not favorite!