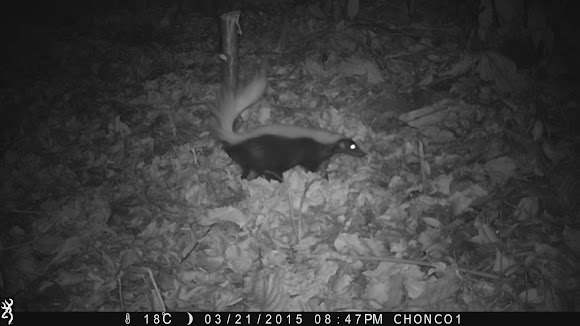 The American hog-nosed skunk (Conepatus leuconotus) is a species of hog-nosed skunk from Central and North America, and is one of the largest skunks in the world, growing to lengths of up to 2.7 feet (82.5 cm). Recent work has concluded the western hog-nosed skunk (formerly Conepatus mesoleucus) is the same species, and Conepatus leuconotus is the correct name of the merged populations. In Texas, it is commonly known as the rooter skunk for its habit of rooting and overturning rocks and debris in search of food. (All from Wikepedia.org)

The species is found in from northern Nicaragua north through, central Guatemala and Honduras, Mexico, and in the southern United States (occuring in the southeastern part of Texas, southern Arizona and southern New Mexico). The species is notably absent from hot deserts and tropical moist evergreen forests - as well as the Baja Peninsula.

You are welcome and we will be waiting for your certenly super innteresting spottings,even better from a natural protected area,thanks for sharing :-)

Thanks for the welcome, yeah I love the site, great to find people interested in nature, I am doing a camera trapping mammal survey in a Natural Protected Area of my country, will love to share other pictures of animal caught on camera, I will check suggested links, thanks a lot!!!

Welcome to Project Noah mario chavez
Nice first spotting,congrats and thanks for sharing
We hope you like the site as much we do; there are many features you can explore:
We invite you to go to http://www.projectnoah.org/faq where you will find the purpose and “rules” of Project Noah.
There is a blog http://blog.projectnoah.org/ where we post articles from spotters with special insight into different organisms.
Look at the global and local missions to put your spottings into: http://www.projectnoah.org/missions