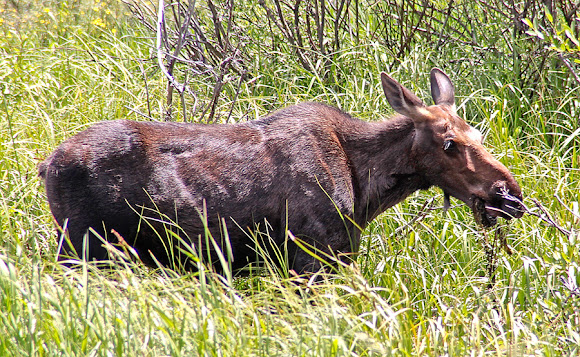 he moose (North America) or Eurasian elk (Europe) (Alces alces) is the largest extant species in the deer family. Moose are distinguished by the palmate antlers of the males; other members of the family have antlers with a dendritic ("twig-like") configuration. Moose typically inhabit boreal and mixed deciduous forests of the Northern Hemisphere in temperate to subarctic climates. Moose used to have a much wider range but hunting and other human activities greatly reduced it over the years. Moose have been re-introduced to some of their former habitats. Their diet consists of both terrestrial and aquatic vegetation. The most common moose predators are wolves, bears, and humans. Unlike most other deer species, moose are solitary animals and do not form herds. Although generally slow-moving and sedentary, moose can become aggressive and move surprisingly fast if angered or startled. Their mating season in the autumn can lead to spectacular fights between males competing for the right to mate with a particular female.

In North America, the moose range includes almost all of Canada (excluding the arctic), most of Alaska, northern New England and upstate New York, the upper Rocky Mountains, northeastern Minnesota, Michigan's Upper Peninsula, and Isle Royale in Lake Superior. Within this massive range, the most diverse range of subspecies exist, containing habitat for four of the six subspecies. In western portions of the continent, moose populations extend well north into Canada (British Columbia and Alberta) and more isolated groups have been verified as far south as the mountains of Utah and Colorado and as far west as the Lake Wenatchee area of the Washington Cascades.[6][7][8] In 1978, a few breeding pairs were reintroduced in western Colorado, and the state's moose population is now more than 1,000 with great potential to grow.

She actually had a calf with her , not sure if that explains it. Was a great sighting that year.

She looks a little lean, hope she fattens up before winter sets in!