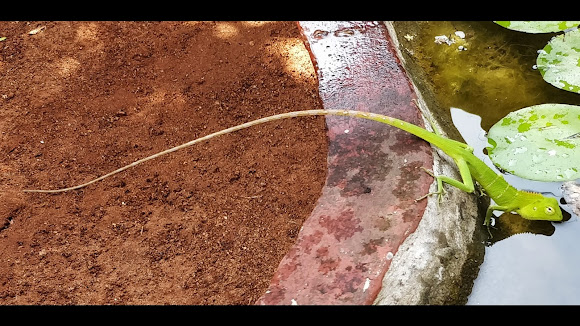 From Wikipedia : Calotes calotes is a considerably large species of agamid, measuring 50 to 65 cm (19.5 to 25.5 in) in length, including the tail.[2] The length of head is one and a half times the size of its breadth, the snout is a little longer than the orbit. The lizard has a concave forehead, swollen cheeks and smooth, unequal upper head-scales. The canthus rostralis and the supraciliary edge both are sharp. A row of 8 or 9 compressed spines, divided into two groups, is above the tympanum, the diameter of these is less than half that of the orbit. C. calotes has 9 to 11 upper and as many lower labials. The body is compressed, the dorsal scales are large and usually feebly keeled, but sometimes smooth. These scales point backwards and upwards and are as large as or a slightly smaller than the ventrals, which are strongly keeled and mucronate. 30 to 35 scales cover the middle of the body. The gular pouch is not developed, the gular scales are feebly keeled, they are nearly as large as the ventrals. A short oblique fold is in front of the shoulder and is covered with small granular scales. The nuchal and dorsal crests are continuous, composed of closely set lanceolate spines with smaller ones at the base. In adult males the height of the crest on the neck equals or exceeds the diameter of the orbit, on the back it gradually diminishes in size. The Limbs are moderate, the third and fourth fingers are nearly equal, however the fourth toe is distinctly longer than third toe. The hind-limb reaches to the front of the eye or further. C. calotes has a very long and slender tail.

I found it in my garden.

Hariprasad V N a year ago

If you are convinced.go ahead. I think so. In case we are wrong...someone on PN will correct us. But I think those white stripes are pretty distinctive. Check other images on goggle ifyou want. Great spotting...I have never seen this one...all we have at home are its duller cousin Calotes varsicolor.

Hariprasad V N a year ago

SukanyaDatta, I've added 2 more photos. Can I confirm the ID ?