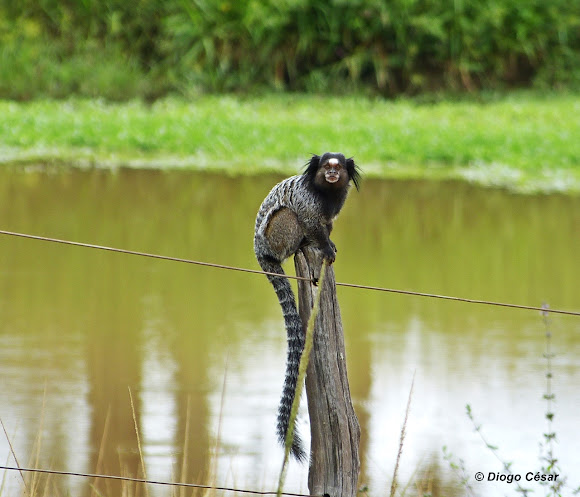 Also known as Mico-estrela in Portuguese, is a species of New World monkey that lives primarily in the Neo-tropical gallery forests of the Brazilian Central Plateau. It ranges from Bahia to Paraná, and as far inland as Goiás, between 14 and 25 degrees south of the equator, and can commonly be seen in the City of Rio de Janeiro. This marmoset typically resides in rainforests, living an arboreal life high in the trees, but below the canopy. They are only rarely spotted near the ground. The black-tufted marmoset is characterized by black tufts of hair around their ears. It typically has some sparse white hairs on its face. It usually has a brown or black head and its limbs and upper body are gray, as well as its abdomen, while its rump and underside are usually black. Its tail is ringed with black and white and is not prehensile, but is used for balance. It does not have an opposable thumb and its nails tend to have a claw-like appearance. The black-tufted marmoset reaches a size of 19 to 22 cm and weighs up to 350 g.

This is such a nifty picture. It shows wildlife interfacing with human constructs. It reminds me of the dragonflies in my garden that prefer to perch on border stakes instead of natural vegetation, they like the tall straight posts best like this little monkey!

No problem. you can edit the spotting to fix it.

Thank you, Desmond.E.S.O, for your confirmation.

Amazing! to make it complete you can add the common name (Black-tufted marmoset) along with the scientific name (Callithrix penicillata).