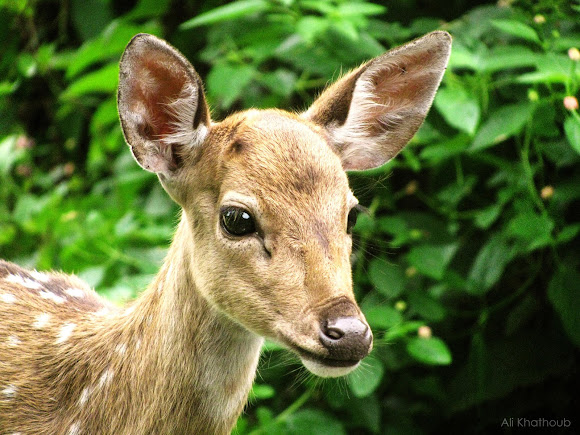 The chital or cheetal (Axis axis), also known as chital deer, spotted deer or axis deer is a deer which commonly inhabits wooded regions of Sri Lanka, Nepal, Bangladesh, Bhutan, India, and in small numbers in Pakistan. The chital goes by various names in India, among which include: Chital horin in Bengali, Thith Muwa in Sinhalese, Jinke in Kannada, Pulli Maan in Tamil and Malayalam, Duppi in Telugu, Phutuki Horin in Assamese, Haran/Harin in Marathi, and Hiran in Hindi/Urdu (the latter two derived from Harini, the Sanskrit cognate for 'deer'). It is the most common deer species in Indian forests. The name Chital comes from the Bengali word Chitral (চিত্রল)/Chitra (চিত্রা), which means "spotted". The chital is monotypic within the genus Axis, but this genus has also included three species that now are placed in Hyelaphus based on genetic evidence.

I've moved this to mammals for you.