A Red Ant With Wings 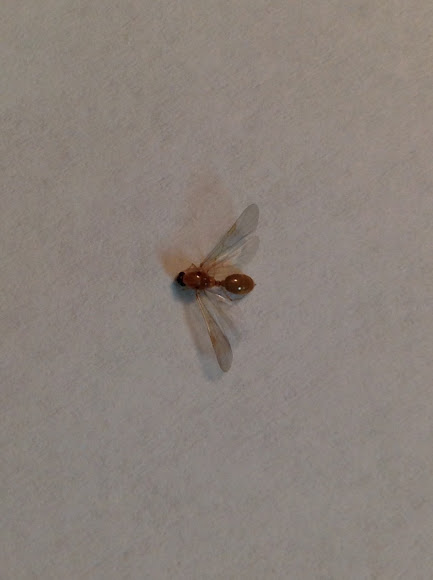 Ants belong to the order Hymenoptera, which also includes bees and wasps. Ants belong to the family Formicidae, which has at least 8,000 species, and possibly as many as 14,000. There bodies are divided into three sections: head, thorax, and abdomen. The head is large, and the abdomen is slender and oval. The thorax or midsection, is connected to the abdomen, by a small " waist" section. Ants range in size, from eight/ one hundredth of an inch, to, one inch long. They are usually, black, brown, red, and yellow in color. Adult ants can only swallow liquids. In the back of the jaw, is a storage pocket. Solid food goes first into this pocket, where strong saliva breaks it down. The ant swallows the liquid part. The solids form into a ball, which the ants spit out. Most ants have simple eyes on top of there heads, as well as a compound eye, with many lenses, on each side of there head. More useful than the eyes, are the antennae. The two slender, pointed rods, that wave constantly from there heads, as the ants moves about. Ants smell and touch, with there antennae. Ants clean themselves with a sort of comb, called a strigil, which is located on there foreleg. Ants are eusocial insects, in the family Formicidae. Ants are easily identified by there elbowed antennae, and the distinctive, node-like structure, that forms there slender waist. Ants do not have lungs. They breath through small holes called spiracles, which are located along the side of the abdomen and thorax. The life cycle of ants, has four stages. Egg, larva, pupa, and adult. Most ants live from six to ten weeks. Although certain queens, may live for as long as 15 years, and some workers, for up to 7 years. The role, or caste, is the occupational group, into which each individual ant is born. There are ( 3 ) major castes ( types ) of ants: 1. Queen. 2. Worker. 3. Soldier. The most distinguishing trait of ant behavior, is socialibility. Ants do not act individually, they behave according to the needs of the colony, in roles dictated by the caste into which they were born. The major unit is the colony, which forms a nest. The nests may be built of paper, twigs, sand, gravel, or other materials. Ants like warmth, and swarm into the sunshine. External Ant Anatomy: Head, thorax, and abdomen. Antennae, mandibles, compound eyes, legs, claws, stinger, and the gaster. Head: houses the compound eyes, antennae, and muscles that power the mandibles. Compound Eyes: ants have poor eyesight. They have many small eyes placed next to each other. This enables them to see close movement. Mandibles: used for cutting, holding, fighting, and digging. There are smaller mouthparts for chewing food. Antennae: used to smell, touch, feel, and communicate with other ants. Attached to the front of the head, they can move in-front and behind the ant. Thorax: all the legs and wings, are attached to the thorax. Legs: are strong and flexible. They have claws on the end of each leg, for grasping. Front legs are used to touch objects, and for cleaning its body. Claws: used to grip onto different surfaces. When on glass, the claws withdraw, and a moist pad allows for adhesion. Gaster: is part of the abdomen. It contains vital organs, and it has a telescoping constriction, of seven segments, that give this area flexibility. Stinger: is used to inject formic acid into its victims. Not all species have a stinger, but they can still spray formic acid, into wounds..

Ants occur throughout the world. They have traveled from there original home, the tropics, to climates as varied as the Polar Regions, mountain ranges, and deserts. Ants have colonized almost every landmass on earth. The only places lacking ants, are Anarctica, and a few remote, or inhospitable islands. They make there nests, using many different materials. Such as: soil, sand, wood, and leaves.

At around 2:00 p.m. in the afternoon, I noticed a small insect, on a pane of glass, to the right of the front door. I went outside, and looked at this small insect. This small insect, was trapped in a spiders web. There was no spider on this web. I took this small insect inside my house, to examine it, and to take photos of it. It was a small red ant, with wings. Its body was about three sixteenth of an inch long, and about one sixteenth of an inch wide. It had a black head, and a red thorax, and a red abdomen. It also had, two elbowed antennae, and six legs. It had a narrow waist, and a stinger, on the tip of it's abdomen. It had two pairs of transparent wings. The forewings were larger than the hindwings. It had two nodes on the abdominal petiole. It had a wasp waist body. Petiole: a slender stalk between two structures, especially that between the abdomen and the thorax, of a wasp or ant. This Red Ant, had two pairs of wings..