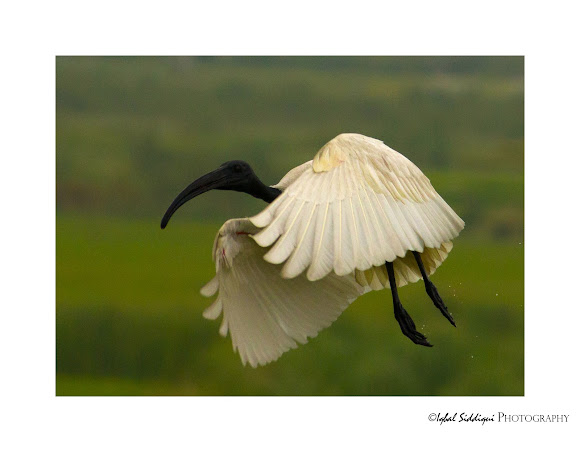 The Black-headed Ibis or Oriental White Ibis (Threskiornis melanocephalus) is a species of wading bird of the ibis family Threskiornithidae which breeds in the Indian Subcontinent and Southeast Asia from northern India, Bangladesh, Nepal and Sri Lanka east up to Japan. It builds a stick nest in a tree and lays 2–4 eggs. Black-headed Ibis preening in Chennai, India It occurs in marshy wetlands inland and on the coast, where it feeds on various fish, frogs and other water creatures, as well as on insects. It walks about actively on marshy land probing with its bill into soft mud and often feeds in shallow water with its head momentarily submerged. Like storks and Spoonbills, it lacks a true voice-producing mechanism and is silent except for peculiar ventriloquial grunts uttered when nesting. Adults are typically 75 cm long and white-plumaged, with some greyer areas on the wings. The bald head, the neck and legs are black. The thick down curved bill is dusky yellow.In breeding,plumage some slaty grey on scapulars and in wings and ornamental plumes at base of the neck. Sexes are similar, but juveniles have whiter necks and a black bill.

Hidden in a cloak of feathers! Very Nice!

Lovely spotting!
Welcome to the community!
Looking forward to more such beautiful spottings!

Excellent shot Iqbal. Welcome to Project Noah. Good information too. Thanks for sharing.