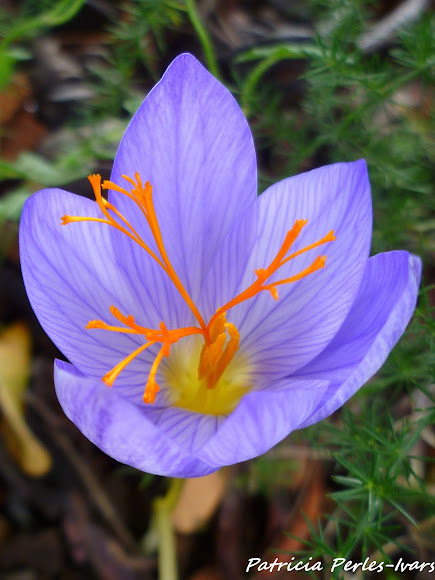 The domesticated saffron crocus, Crocus sativus, is an autumn-flowering perennial plant unknown in the wild. Its progenitors are possibly the eastern Mediterranean autumn-flowering Crocus cartwrightianus which is also known as "wild saffron". In autumn, purple buds appear. Only in October, after most other flowering plants have released their seeds, do its brilliantly hued flowers develop; they range from a light pastel shade of lilac to a darker and more striated mauve. Upon flowering, plants average less than 30 cm (12 in) in height. A three-pronged style emerges from each flower. Each prong terminates with a vivid crimson stigma 25–30 mm (0.98–1.2 in) in length.

found in an old garden, where someone probably has cultivated saffron

Saffron was detailed in a 7th-century BC Assyrian botanical reference compiled under Ashurbanipal. Documentation of saffron's use over the span of 4,000 years in the treatment of some 90 illnesses has been uncovered. Saffron-based pigments have indeed been found in 50,000 year-old depictions of prehistoric places in northwest Iran. The Sumerians later used wild-growing saffron in their remedies and magical potions.Saffron was an article of long-distance trade before the Minoan palace culture's 2nd millennium BC peak. Ancient Persians cultivated Persian saffron (Crocus sativus 'Hausknechtii') in Derbena, Isfahan, and Khorasan by the 10th century BC. At such sites, saffron threads were woven into textiles, ritually offered to divinities, and used in dyes, perfumes, medicines, and body washes.Saffron threads would thus be scattered across beds and mixed into hot teas as a curative for bouts of melancholy. Non-Persians also feared the Persians' usage of saffron as a drugging agent and aphrodisiac.During his Asian campaigns, Alexander the Great used Persian saffron in his infusions, rice, and baths as a curative for battle wounds. Alexander's troops imitated the practice from the Persians and brought saffron-bathing to Greece.

thank you so much @Mark Ridgway! :)

thank you for all your comments!
Ashish Nimkar at the Mediterranean basin, is very important too, very apreciated, and very expensive!

yes Sukaina! we use it frecuently in the zone of Spain where I live!
I love it!

put the saffron in the food make it so delicious ..

ooh, love the new pic too!

no, its lovely, I wouldn't change a thing on it! Perfect to paint

Thank's arlanda and Smith'sZoo! :)
sorry, the picture is a little blurry ... is all I can do with my camera! :)

That bright orange and blue is complementing each other beautifully, great photo!

I know! (is from wikipedia! :))
Anyway, the saffron is very important here in Spain, is a very expensive spice, and long ago, it was very much cultivated here, and used in many dishes of our gastronomy