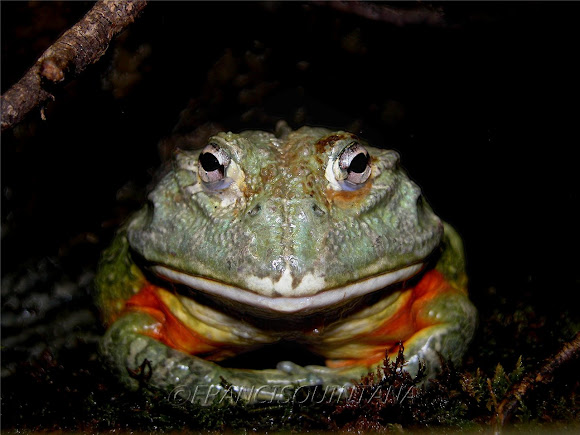 ...a species of frog in the Ranidae family. It is also known as the pixie frog due to its Latin name. It is found in Angola, Botswana, Kenya, Malawi, Mozambique, Namibia, South Africa, Swaziland, Tanzania, Zambia, Zimbabwe, and possibly Democratic Republic of the Congo. Its natural habitats are dry savanna, moist savanna, subtropical or tropical dry shrubland, intermittent freshwater lakes, intermittent freshwater marshes, arable land, pastureland, and canals and ditches. This is a large frog, with males weighing 1.4 kg (3.1 lb), though can easily exceed 2 kg (4.4 lb) while females are half the size, making it unique among frogs as in most amphibians females are usually larger than males. Males can reach 10 inches while females only reach about 6.

The African bullfrog is carnivorous and a voracious eater, eating insects, small rodents, reptiles, small birds and other amphibians.This frog is also aggressive and has been known to bite when provoked. An African bullfrog kept at the Pretoria Zoo in South Africa once ate 17 baby cobras (Hemachatus haemachatus).

The African bullfrog is an exotic pet in many countries around the world, and owning it is not prohibited by any laws. Animals sold are generally bred in captivity. They emit a loud croaking sound.

The African bullfrog is carnivorous and a voracious eater, eating insects, small rodents, reptiles, small birds and other amphibians.