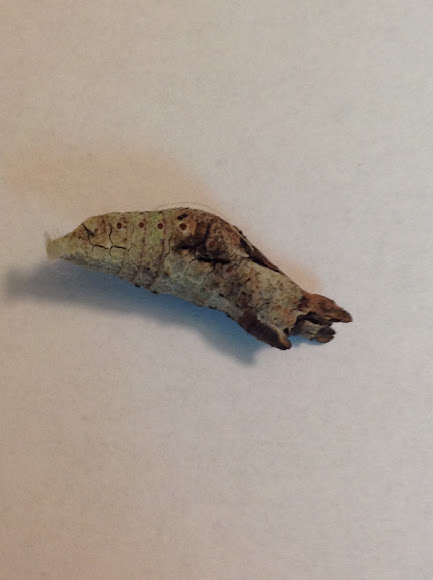 The Giant Swallowtail Butterfly, is common in various parts of North America. In the United States and Canada, it is mainly found in the south and in the east. It has a wingspan of about, 10-16 cm. ( 3.9-6.3 in. ). It is the largest butterfly, in the United States and Canada. Some of its common names are: Giant Swallowtail, Orange Dog, and Orange Puppy. The body and wings, are dark brown to black, with yellow bands. There is a yellow ( eye), in each wing tail. The mature caterpillars, resembles bird droppings, to deter predators, and if that doesn't work, they use there osmeteria. These are ( horns ), which they can display and then retract. Larval foods: Rutaceae species such as: citrus, Zanthoxylum americanum, Ptelea trifoliata, and Ruta graveolens. The chrysalis stage is variable, but usually takes about 10 to 12 days, although in the fall, they may stay in the chrysalis stage, over the winter, and emerge in the spring. Giant Swallowtails in general, fly fast and high, and can be difficult to capture.

In the United States, Giant Swallowtails, are mostly seen in deciduous forests, and citrus orchards, where they are considered a major pest. They fly between May and August.

The pupa resembles a piece of wood. This pupa was one and three eighths, of an inch long. It's color, was different shades of brown. I could see its spiracles, running along the side of the abdomen, of this pupa. Top end of this pupa, had two points on it. I found this pupa, plus others, on a lime tree, in my friends front yard. My friend had orange and lime trees, in his front yard, where I found, lots of Giant Swallowtail caterpillars and pupae, on these citrus trees. What a beautiful sight to see. This is the beauty of nature.