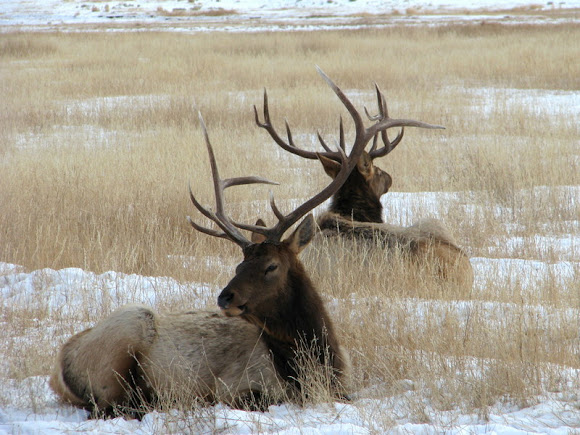 The poor fellow in the last pic had a deformed antler and probably wasn't going to get lucky with the ladies. Photo's taken at the National Elk Refuge - here's some info on it. Late 1800's When settlers arrived in Jackson Hole in the late 1800s, there may have been as many as 25,000 elk in the entire valley. The town of Jackson was built in a large portion of elk winter range. Livestock competed for winter food, and hungry elk raided haystacks. These severe conflicts between humans and elk diminished the Jackson elk population. 1912 In the early 1900s, severe winters with deep, crusted snow also took a serious toll on the wintering elk. The refuge was created in 1912 as a result of public interest in the survival of the Jackson elk herd. Today the refuge continues to preserve much of the remaining elk winter range in the valley, approximately one-quarter of the original Jackson Hole winter range. Elk stay on the refuge for approximately six months each winter. An 8-foot high fence along the main highway and the northern border of town prevents elk from moving through Jackson and onto private lands. Today Today the refuge consists of nearly 25,000 acres devoted to elk winter range. This represents the last remaining elk winter range in Jackson Hole The National Elk Refuge is administered by the U.S. Fish & Wildlife Service and is one of more than 545 refuges in the National Wildlife Refuge System. This system was established to preserve a national network of lands and waters for the conservation and management of the fish, wildlife and plants of the United States for the benefit of present and future generations.

Thanks Christy - your buck gives me hope for this poor guy!

Very neat spotting, Rachael! I'm amazed when these guys with mutations do make it in life...I wouldn't be surprised if he could hold his own...I saw a buck a couple weeks ago that had about a dozen females in his harem and check out what his deformity was: http://www.projectnoah.org/spottings/151...

Yeah this was taken at the National Elk Refuge in Jackson. They preserve and manage a winter habitat for these Elk.

woow what a great population of elks!