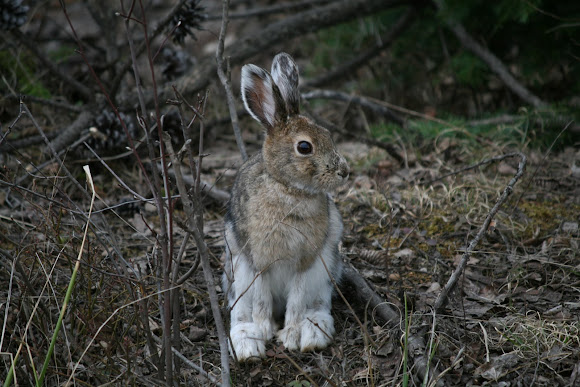 The Snowshoe Hare is broadly distributed in the north from coast to coast and occurs in a variety of habitat types, including swamps, hardwood forests, and mixed and evergreen forests. Nocturnal like most members of the family , this hare consistently travels along the same runways and tends to remain hidden in vegetation until sundown. It is active year round and can have two to five litters per year, each producing one to eight offspring. Their populations fluctuate radically over 10-year cycles, which is probably because of changes in food supply: the hare population grows, they over-graze, and starvation follows. True to its name, the Snowshoe Hare has large feet padded by dense spiraling hairs, each acting like a spring. Most Snowshoe Hares change color, from a summer brown coat to winter white, offering camouflage in each season.

Hi everyone I added some info

I felt its front legs thicker than expectations.... what make me feel this buddy very smart, healthy and so cute....

there is something special about this picture ... not sure what it is !

Thanks for the info and comments

Must be a Hare with colour and type of ears...
Forest Dragon... thank you for most informative comment.... like a lesson on this beautiful organism..

What a wonderful picture! Despite this rabbity appearance, this is definitely a Snowshoe Hare! You can see that this hare is shedding from his/her winter coat to a summer coat. I remember seeing these guys occasionally when I lived up in Maine and New Hampshire.

Snowshoe Hares are quite small compared to many other hare species. They are closer in size to cottontail rabbits.

Rabbits and hares are related but they do have some distinct differences. Hares' coats change color, they are white in winter and brown in the warmer seasons they are brown. Rabbits are brown all year round.

Rabbits and Hares can't interbreed. Hares tend to be more solitary while rabbits prefer to be in groups.

I hope this helps!