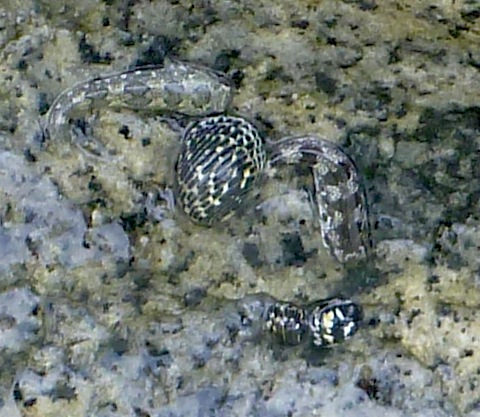 We were taking pictures of the tiny zebra shells on the granite rocks and never saw the perfectly camouflaged little fish until we zoomed the pictures we had taken. They were at and above the water line, wet and slimy looking. They exactly match the color and pattern of the granite and are truly invisible. They are called Hourglass Clingfish because of the hourglass like markings on their backs. These fish apparently prey on limpets and probably the zebra shell as well, since they were so closely associated with these.

Above the water line on the granite rocks of The Baths, Virgin Gorda Island, British Virgin Islands. Mixed with Zebra shells and limpets.

http://www.ubio.org/portal/index.php?sea... http://www.fishbase.org/summary/Tomicodo... An undergraduate tested the sticking ability of 22 freshly killed Gobiesox maeandricus on eight surfaces mimicking the range of sandpaper grades and reported at the meeting that the fish adhered to them all with an average force 180 times their body weight. (In contrast, rubber suction cups fell off rougher surfaces, sticking only to the three smoothest ones.) Scanning electron microscopy of the clingfish's belly fins revealed that the secret to its staying power may be a rim of microscopic hairs akin to what geckos utilize on their toes to enable them to walk upside down on ceilings. (http://www.sciencemag.org/content/335/60...)

Dear Lauren, I just managed to identify both my unknown fish...Especially the lumpfish, it was the very last fish, of it's taxon, wich was the last of the Gobiesocidae family, wich counts 120 species...It took me for ever, just to come and google the last species of the whole list!
Anyway, have a good night
(I'll be glad to help anytime :)

Hi Despina. You are my hero!!!!! You did it. I can't believe what a cool animal this is and they have done neat studies on it's sticking abilities being similar to that of Geckos. And they apparently prey on the shell fish we found them with. I never even knew this kind of fish existed. They must hold a film of water around themselves for long periods in order not to dry out above the water line. That film should be chemically examined.
Un abrazo.

I forgot to mention that it's also called "Barred Clingfish".
Have a nice evening :)

I think I have your species, Lauren!
It's called Tomicodon fasciatus or Hourglass Clingfish, a name wich shares with other species of it's genus, basically because they all have the same hourglass pattern in thei back, but this one, is the only one of these species, wich actually lives in Caribbean (the other 2-3 , like the T. zebra species, live in Pacific ocean).
Ther's lots of pics in internet, but pretty messy identification...
http://eol.org/pages/204755/overview

To be honnest, I think you should look at the Cottidae family first...Our species don't look that much like blennies, but they could be easily sculpins...
So good night from me (it's Sunday night here), and I will search tomorrow :)

Thank you Despina, I'll search too. They must have suction things on the venter to stay on the rocks? They are slimy looking too.

Or they could belong to the Cottidae family, another 300 species there...
I'll search tomorrow, I promise :)
http://en.wikipedia.org/wiki/Cottidae

Oh yeah, I remember that spotting :)
No, my fish, was under the rocks, not on the rocks...Anyway, I wonder if both species (mine and yours) belong to the Blennidae family, but there's 9 subcategories, with 325 species in total...
I got a headache :/
http://en.wikipedia.org/wiki/Category:Bl...

Dear Despina, Can you see this way?