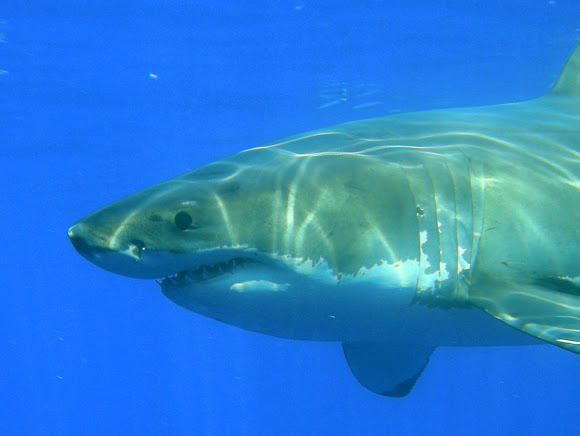 Photo take at -5 m near the surface finally after two days of dives, there coming from the deep blue, my hart stop for a moment my hands are shaking o men. I see it my first White Shark and the only one on this expedition very close swim by analyzing us two times this one is a little more than 4 mt a i can wait to go back next year. I even think in find a job during the season. Now i know who is the real King of the Oceans. is a species of large lamniform shark which can be found in the coastal surface waters of all the major oceans. The great white shark is mainly known for its size, with the largest individuals known to have approached or exceeded 6 m in length, and 2,268 kg in weight.This shark reaches its maturity around 15 years of age and can have a life span of over 30 years.This is also a lifetime spotting for me.The great white shark has a robust, large, conical snout. The upper and lower lobes on the tail fin are approximately the same size which is similar to some mackerel sharks. A great white displays countershading, by having a white underside and a grey dorsal area (sometimes in a brown or blue shade) that gives an overall mottled appearance. The coloration makes it difficult for prey to spot the shark because it breaks up the shark's outline when seen from the side. From above, the darker shade blends with the sea and from below it exposes a minimal silhouette against the sunlight. Great white sharks, like many other sharks, have rows of serrated teeth behind the main ones, ready to replace any that break off. When the shark bites, it shakes its head side-to-side, helping the teeth saw off large chunks of flesh- Wikipedia

Great white sharks live in almost all coastal and offshore waters which have water temperature between 12 and 24 °C (54 and 75 °F), with greater concentrations in the United States (Atlantic Northeast and California), South Africa, Japan, Oceania, Chile, and the Mediterranean. One of the densest known populations is found around Dyer Island, South Africa, where almost all of the shark research is done.

Spot in Isla Guadalupe near Baja California North Ensenada, México this has become the beast place to spot the Great White shark in the last years ther are many tour operatiors in the area of San Diego as well. The IUCN notes that very little is known about the actual status of the great white shark, but as it appears uncommon compared to other widely distributed species, it is considered vulnerable.

Thanks Maria so much :)

Gives me shivers just watching that!! Fantastic footage!! And yes, VERY brave of you!!! Wonderful spotting!!

Thanks so much António well i was so scare that i don´t want to move at all my hands where shaking the water was very cold as well men it was one of my best experience in life :)

fantastic with no hands,sorry,i mean without cage :) you a courageous man Gerardo,that amazing,no cage ,very well done dangerous work,congrats and thanks for sharing,the video is so cool

No problem Nick !
Thanks Joshua and Sofiar :)

I made this guy the main picture of the mission. Sweet shots.

Thanks so much Sergio
No cage :)

I understand when you say it is a lifetime experience. It is just awesome, Gerardo, I really envy you. Congratulations.

Perhaps you would consider adding this to a mission: http://www.projectnoah.org/missions/1607...

Thanks Adam it was a real drill experience i´m telling, this is the beast dive ever fro me.

Brilliant Gerardo - but I'm not sure if I'm jealous of you - or glad I wasn't in the water at the same time as you! :)

Thanks Marta no case the real thing :)
Thanks so much Antonio is a pleasure to share this:)

Guadalupe, one of my dreams! were you in a cage?