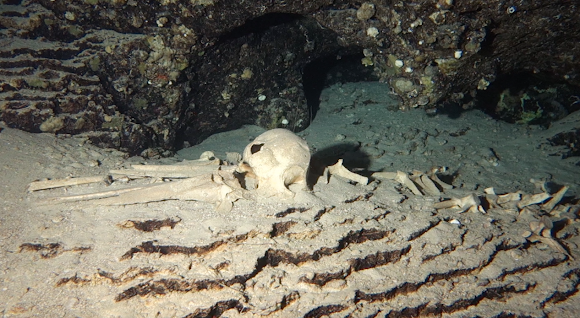 This is a full skeleton of a Dolphin, most likely the Common Bottlenose Dolphin. This skeleton is found in a cave at a dive site in Sipadan Island called, Turtle Tomb/Cavern. Turtle Tomb was made famous through the documentary by Jacques Cousteau, The Ghost of the Sea Turtle. Besides the skeleton of this Dolphin, there are a few other skeletons of Turtles. Both Dolphin and Turtles are air breathing animals and needs to come up to the surface to breath. It is believed that they have ventured into the cave and then couldn't found their way out of the cave and eventually drowned in the cave.