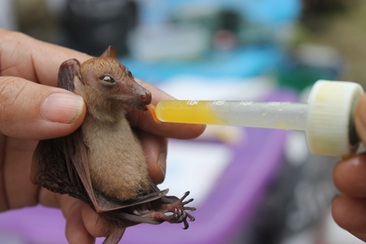 also known by the common name the long-tongued fruit bat, is amongst the smallest of the family Pteropodidae (Gunnell et al., 1996) The body length including the head is approximately 60 - 85 mm long (Nowak, 1991). The tail is extremely short, reaching to only about 4 mm at the longest length, and the uropatagium is almost non-existent. The ears are about half of the head length -- approximately 6 mm; Also, the ear does not have a tragus as do many families in the order Chiroptera (Dobson, 1876). The fur of the long-tongued fruit bat is reddish-brown on the back and is very long compared to other species in Pteropodidae. The fur on the abdomen is shorter than on the back and is paler in color. A dark stripe of brown fur runs bilaterally down the top of the head to the neck. The rostrum is long and narrow and the eyes are large compared to bats in the suborder Microchiroptera (Nowak, 1991).

This is distributed throughout the countries of the Philippines, Indonesia, Thailand, Malaysia, New Guinea, The Solomon Islands, and northern Australia (Gunnell et al., 1996).

Hi Maria dB we are feeding them with mango juice before releasing. We were monitoring the bats in a river assessment research project.

Very nice. Why is it being fed? Was it rescued?

So fragile. Thanks for sharing this.