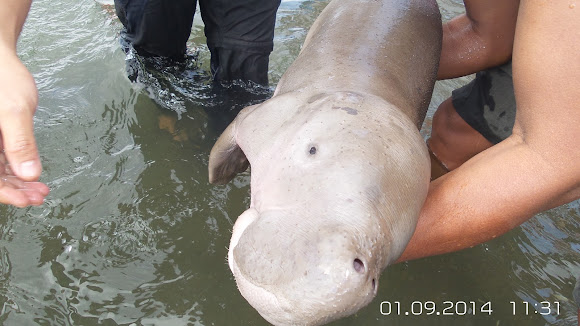 The dugong (Dugong dugon) is a large marine mammal which, together with the manatees, is one of four living species of the order Sirenia. It is the only living representative of the once-diverse family Dugongidae; its closest modern relative, Steller's sea cow (Hydrodamalis gigas), was hunted to extinction in the 18th century. It is also the only sirenian in its range, which spans the waters of at least 37 countries throughout the Indo-Pacific, though the majority of dugongs live in the northern waters of Australia between Shark Bay and Moreton Bay. The dugong is the only strictly marine herbivorous mammal, as all species of manatee use fresh water to some degree. (http://en.wikipedia.org/wiki/Dugong)

This neonate dugong was found beached in Sitio Boulevard, Brgy. Binulasan, Infanta, Quezon, Philippines on the early morning of January 9, 2014 by fishermen Manolito and Michael Nolledo. Named "Binu" after the place where he was found, he died nine days after due to internal disorders at a marine rescue facility in Manila where Binu was taken after assessing that he cannot be released in back in the wild. For more reports visit the following links: http://www.philstar.com/headlines/2014/0... http://www.mb.com.ph/denr-rescues-dugong... http://thepoc.net/component/k2/item/1996...

Hi Jeff, thanks for sharing. This is a sad story. To comply with the spotting rules for Project Noah, please crop photo #1 until there are no human faces visible. Thanks!